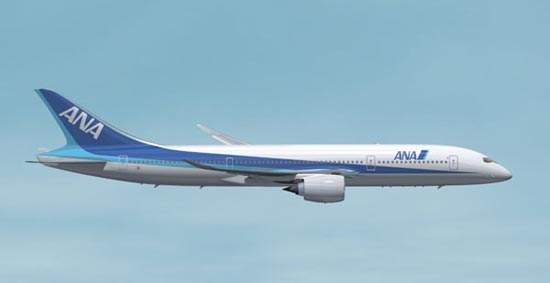 The launch order for 50 787 Dreamliner aircraft was placed by All Nippon Airways (ANA) and announced in April 2004. 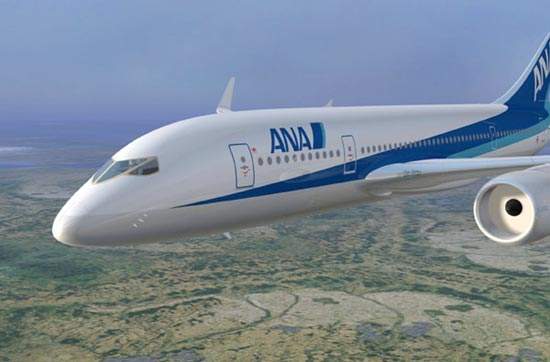 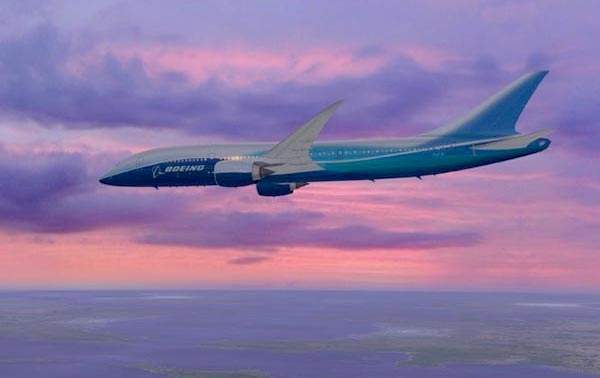 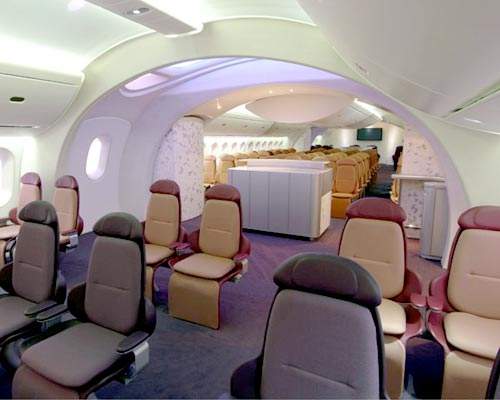 Boeing has explored radical new concepts for the interior cabin configuration including 'sweeping arches' and 'a calming, simulated sky' to enhance passenger perception of spaciousness. 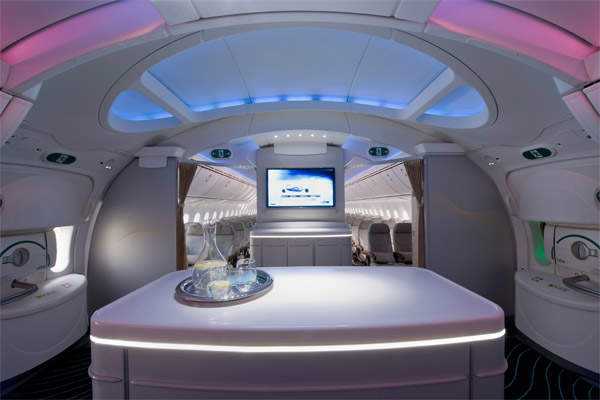 Boeing's third 787 Dreamliner, ZA003, has had the cabin refurbished to show the capabilities of the Dreamliner's interior. Image courtesy of Boeing. 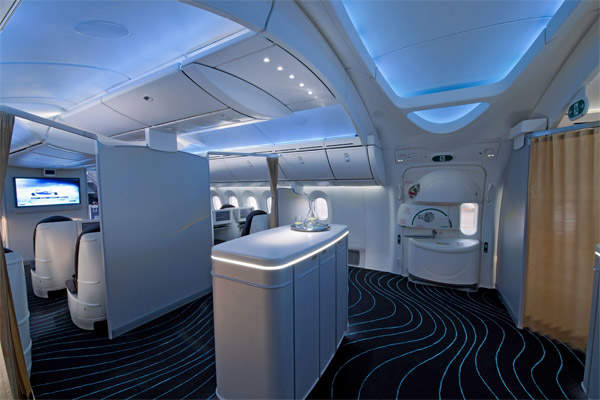 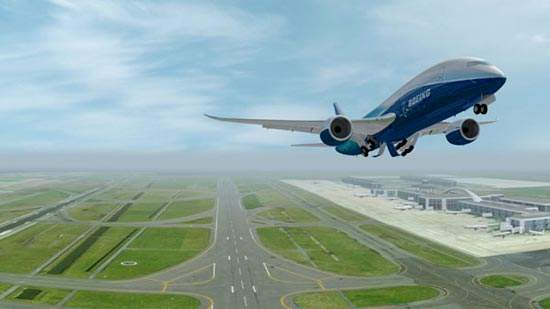 The 787 will be able to fly directly to smaller airports avoiding the need for passengers to transfer flights to regional destinations. 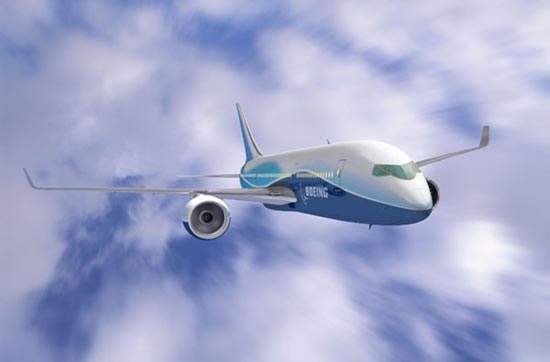 The 787-3 short-range version is the same length and height but with a shorter wingspan. The range is reduced to 6,480km. 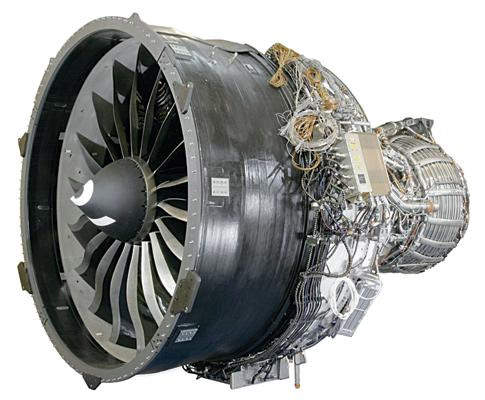 The General Electric GENX (GE next generation) engine is a derivative of the GE90 engine and uses composite fan blades. Image courtesy of GE. 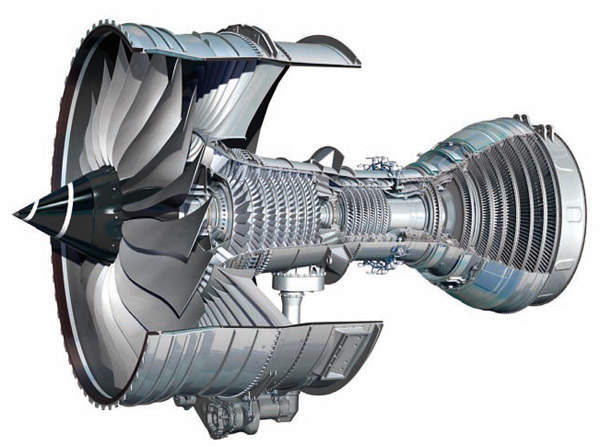 The Rolls-Royce Trent 1000 is a new ultra-high-thrust variant of the Trent family and uses a three-shaft layout. Image courtesy of Rolls Royce. 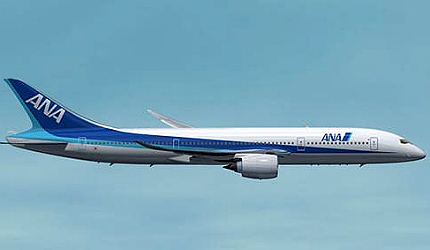 The aircraft is highly fuel-efficient and offers a lower cost of travel in terms of seat cost per mile as well, with the ability to fly directly to smaller regional airports instead of larger airports where passengers proceed to transfer flights to regional destinations.

Aircraft assembly began in June 2006 and final assembly in May 2007. The first aircraft was rolled out in July 2007 and the first flight of the Boeing 787 Dreamliner took off from Paine Field in Everett, Washington, on 15 December 2009.

ZA005, the first Dreamliner to have General Electric GEnx engines rather than the Rolls Royce Trent 1000 engines, made it’s first flight and entered the test program in June 2010.

On 18 July 2010, the Dreamliner was showcased at the UK’s Farnborough International Airshow 2010.

The Dreamliner aircraft is being designed in three versions, the baseline version, a short-range and a stretched version.

The stretched version, 787-9, has the same wingspan and height as the standard 787 but the length is increased to 63m.

In October 2006, Boeing business jets launched a VIP version of the 787, with an order for four aircraft placed by undisclosed customers.

The Boeing Dreamliner aircraft is of conventional design with low sweptback wings and two underwing pylon mounted engines. The design has replaced the Sonic Cruiser programme and incorporates some of the advanced design features developed while examining the Sonic Cruiser concept. The design includes increased use of lightweight and high durability composites and advanced aluminium alloys.

The low sweptback wings have raked wingtips. Carbon fibre and epoxy composites and titanium graphite laminate is used in the construction of the wings.

The major structural work is being shared by principal industrial partners in USA, Japan and Europe.

Boeing is responsible for about 33% of the production, with the flight deck and fuselage being manufactured at Wichita, the wings and the fuselage fairings at Winnipeg, Canada, the fin at Frederickson and the moving leading and trailing edges of the wings at Tulsa and Boeing Australia. Japan’s Fuji Heavy Industries manufactures the centre wing box and installs the wells.

A joint venture company, Global Aeronautica, set up by Vought Aircraft Industries and Alenia Aeronautica, is responsible for the manufacture of the mid section and rear section of the fuselage including the tailplane, representing a 26% share of production which will be based at Charleston, South Carolina. The French company Latecoere supplies the passenger doors. Goodrich provides the nacelles and thrust reverser.

The fuselage cross-section of 5.74m is compatible with standard LD3 containers. The cargo revenue capacity will increase by 40% to 60% compared with current airliners.

Kaiser Electroprecision provides the pilot controls, which is similar in function to those of the Boeing 777.

Honeywell, of Phoenix, Arizona, was selected to provide the flight control electronics, autopilot and the navigation package, which include the flight management function, inertial reference system, air data system and a multimode receiver global positioning system.

The 787 avionics are based on open systems architecture. Smiths Aerospace UK was selected to supply the common core system (CCS). This will replace traditional dedicated signal wiring with remote data concentrators. The concentrators link sensors and effectors to a distributed computing resource through a dedicated communications network. This contributes significantly to the weight reduction.

Astronautics Corp. provided the dual electronic flight bag (EFB), which contains all the documentation required by the pilot in digital format.

The current configuration of the interior features repeated sweeping arches, dynamic lighting and electronic window shades whose transparency passengers can change during the flight. Diehl Luftfahrt Elektronik provides the cabin lighting, which includes a ‘simulated sky’ ceiling effect produced by arrays of light-emitting diodes (LEDs) which can change in colour and brightness.

The 787 has larger centre-mounted overhead luggage bins that descend for easy loading and then pivot upward.

Each of the three planned 787 models uses the same engines. Both engines fit to a standard engine interface allowing interchangeability. The traditional bleed air heating and de-icing systems have been eliminated in favour of electrical systems.

The General Electric GENX (GE next generation) engine is a derivative of the GE90 engine and uses composite fan blades, a high-pressure ration compressor and a single annular combustor where the compressed air and fuel are mixed, to give very low level of emissions. Ishikawajima-Harima Heavy Industries (IHI) and Mitsubishi Heavy Industries (MHI) of Japan, Volvo-Aero of Sweden, Techspace Aero of Belgium and Avio of Italy participate in the development. The GENX engine was certified in March 2008.

The Rolls-Royce Trent 1000 is a new ultra-high-thrust variant of the Trent family and uses a three-shaft layout.

Goodrich of Charlotte NC has been chosen to provide the fuel-quantity indicating system and fuel management software.

Messier-Dowty of Velizy, France, was selected to supply the main and nose landing gear. The company is working with Boeing during the joint definition phase defining the landing gear and aircraft interface before the firm aircraft configuration is decided in 2005. Smiths Aerospace provides the landing gear actuation systems.

The electric braking system, supplied by Goodrich and Messier-Bugatti, is comprised of the aircraft wheels, electro-mechanically actuated carbon brakes and electro-mechanical actuator controllers. The system provides advantages over hydraulic brakes of digital control and monitoring, reduced weight and high reliability. The absence of hydraulic brake fluid avoids the risk of leaks and possible fire hazards.

Boeing plans to acquire the business and operations of Vought Aircraft Industries at its South Carolina facility. The company performs fabrication and assembly of structures and systems installation of 787 aft fuselage sections.

As of November 2011, Boeing has 821 orders from 55 customers around the world. The first aircraft was delivered to All Nippon Airways, a Japanese air carrier, in September 2011.

In October 2008, American Airlines announced the intention to acquire 42 (plus 58 options) 787-9 aircraft, for delivery between 2012 and 2018. An additional 25 Boeing 787 Dreamliner aircraft were ordered by United Airlines in December 2009, as replacements for its twin-aisle fleet. The aircraft will be delivered from 2016 to 2019.