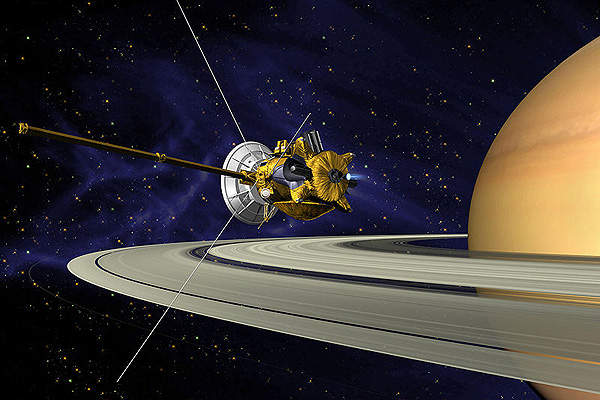 Cassini-Huygens is a space mission aiming to study the planet Saturn and its satellites. Pictured is an artist's impression. 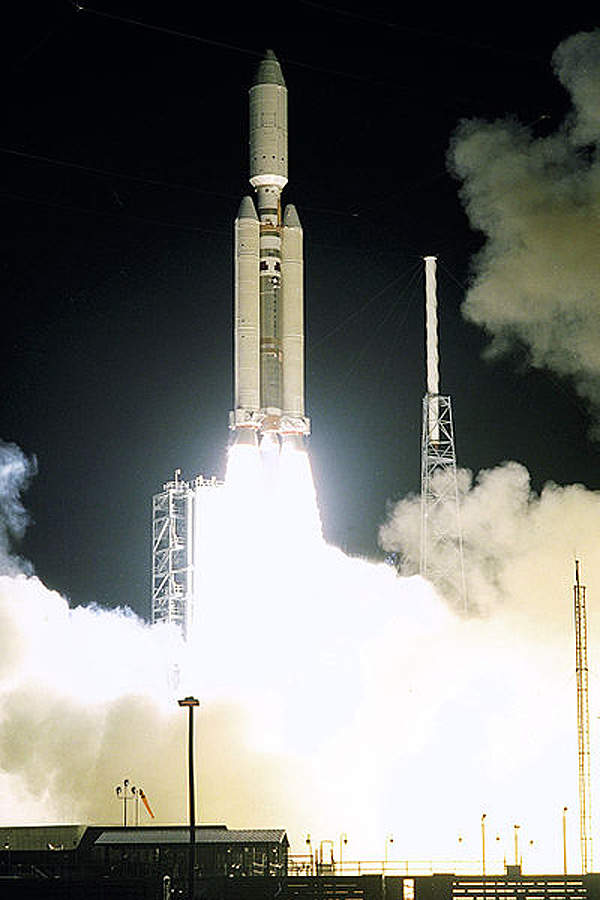 Cassini-Huygens was launched in October 1997 onboard the Titan IV-B / Centaur launch vehicle. 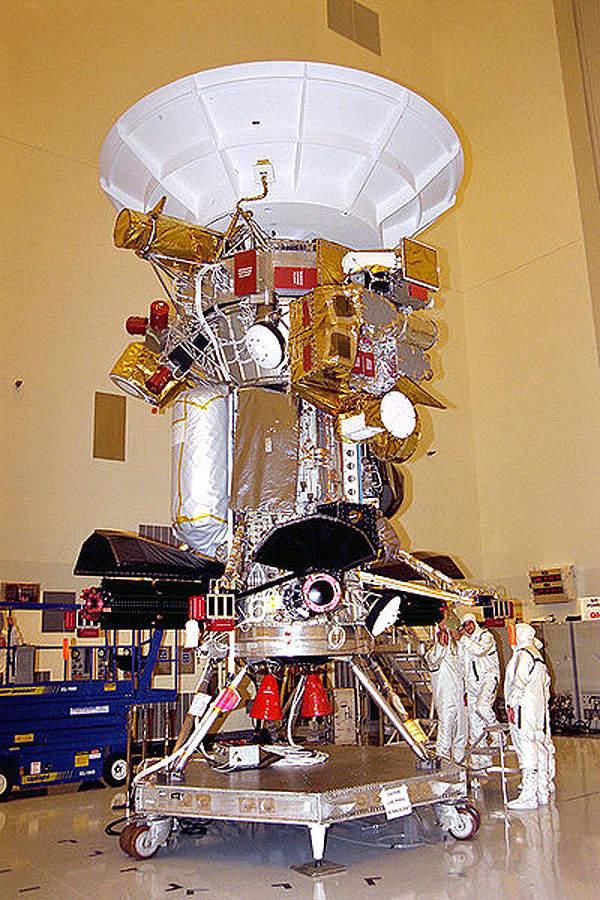 The Cassini-Huygens mission is being managed by Nasa's Jet Propulsion Laboratory (JPL) in Pasadena, California. 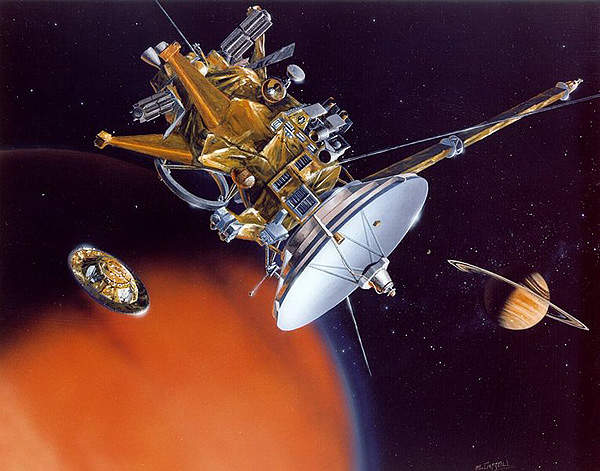 An artist's conception of the Huygens probe separating from the spacecraft to reach Titan. 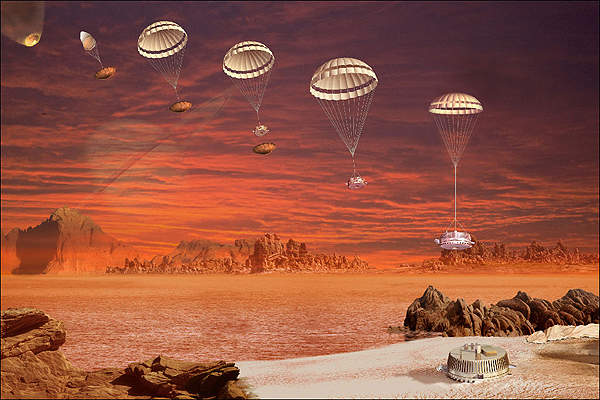 An artistic impression of the Huygens probe's descent on to Titan with the help of parachutes. Image courtesy of ESA - D. Ducros. 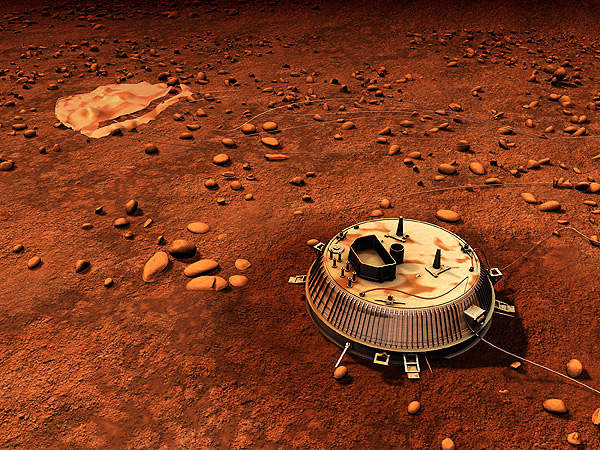 An artist's impression of the Huygens probe after its landing on Titan. Image courtesy of ESA - C. Carreau.

Cassini-Huygens is a space mission aiming to reach the planet Saturn and its satellites. It is a joint effort of Nasa, ESA (European Space Agency) and ASI (Agenzia Spaziale Italiana / Italian Space Agency).

The Cassini-Huygens spacecraft was launched in October 1997 from Cape Canaveral’s Space Launch Complex 40 (SLC-40) in Florida. The mission landed on Saturn’s moon, Titan, in January 2005 after a seven-year journey through the solar system.

The mission is being managed by Nasa’s Jet Propulsion Laboratory (JPL) in Pasadena, California.

Purpose of the Cassini-Huygens mission to Saturn

The Cassini-Huygens programme was launched to study Saturn and its moons, including Titan and Enceladus.

In the first mission, Huygens probed the planet’s largest moon, Titan. Images of large bodies of liquid were sent back to Earth. Meanwhile, Cassini sent a stream of data on Saturn’s system.

The extended mission has studied the other icy moons and rings of the planet. In the Solstice mission, Cassini will revisit the moons and the rings for further studies.

Design of the Cassini orbiter and Huygens probe

"The Cassini-Huygens spacecraft was launched in 1997 from Cape Canaveral’s Space Launch Complex 40 in Florida."

Cassini-Huygens is a three-axis stabilised spacecraft. It is equipped for 27 diverse science investigations. It consists of two main elements — the Cassini orbiter and the Huygens probe.

The Cassini orbiter has 12 instruments while the Huygens probe has six. Many instruments in these elements are functional in multiple domains and different environments.

Communication between the base station and the spacecraft takes place through one high gain antenna. There are also two low gain antennas which are used during emergencies, such as power failures.

Huygens is named after 17th century Dutch astronomer Christiaan Huygens. It has been designed by the ESA to investigate the clouds, atmosphere and surface of Titan. The probe resembles a shellfish, with the interior protected by an outer hard shell. It weighs 319kg and measures 2.7m across.

The probe is composed of two parts. The Entry Assembly Module housed the equipment which controlled Huygens after its separation from Cassini, while the Descent Module contained instruments and parachutes to aid its descent on to Titan.

Launch of the Cassini-Huygens spacecraft and planetary fly-bys

Cassini-Huygens was launched on the Titan IV-B / Centaur launch vehicle. Launched on 15 October 1997, the mission took seven years to reach its destination.

As the heavy weight spacecraft (5,600kg) could not be carried by any launch vehicle directly to its destination, the gravity assist (fly-bys) technique was used to ‘push’ the spacecraft to Saturn.

The gravity assist technique works as a result of mutual gravitational forces of the spacecraft and the planets which it passes by. The resulting exchange of energy supplies the required momentum to the spacecraft.

The Cassini-Huygens spacecraft got its momentum by looping around the Sun twice. In the first loop, it gained energy from Venus on 26 April 1998. In the second loop, it again gained energy from Venus on 24 June 1999, and from Earth on 18 August the same year. With this momentum, the spacecraft was able to reach the outer solar system. The final momentum was supplied by a fly-by of Jupiter on 30 December 2000.

The Huygens probe separated from Cassini on the same day that the spacecraft reached Saturn. The probe travelled for 20 days before entering the atmosphere of Titan on 14 January 2005.

The probe landed on Titan with the help of three parachutes. Cassini orbiter provided the probe support equipment for Huygens to track, collect and deliver the data during its descent. The scientific instruments in the probe became active just before it touched Titan’s atmosphere.

The probe is the most distant landing of a craft launched from Earth.

"The mission is being managed by Nasa’s Jet Propulsion Laboratory (JPL) in Pasadena, California."

Microwave remote sensing instruments are used to map atmospheres, determine the mass of moons, collect data on ring particle size and unveil the surface of Titan. The two instruments in this category are: radar and radio science (RSS).