The CargoLifter AG CL 160 super-heavy lift cargo airship was designed to transport very heavy objects more economically, being able to deliver its payload directly to the desired 'drop off' point. 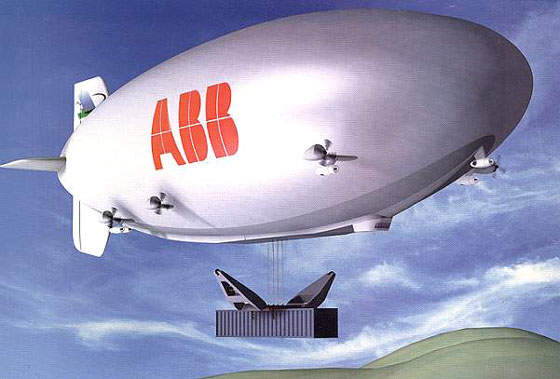 The CL 160 is able to lift very heavy awkward loads, and deliver them to difficult locations, such as mountainous or jungle terrain where traditional logistics would struggle. 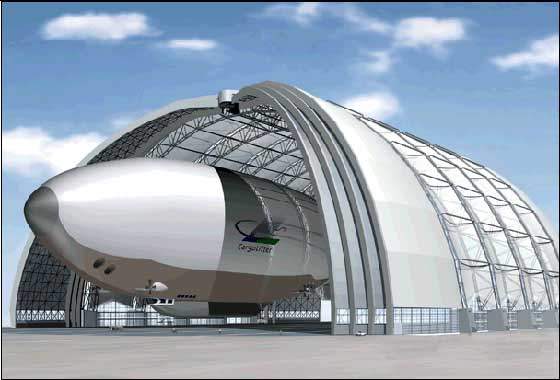 The CargoLifter CL 160 derives its name from its designed payload capacity of 160t. 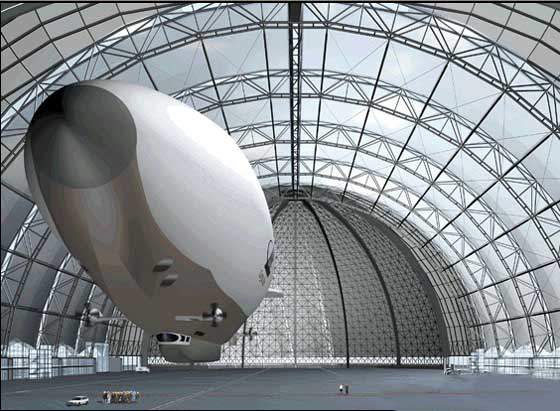 CargoLifter AG have constructed a headquarters hangar capable of housing their CL 160 fleet at a site located on the former military airfield of Brand, 60km south of Berlin. 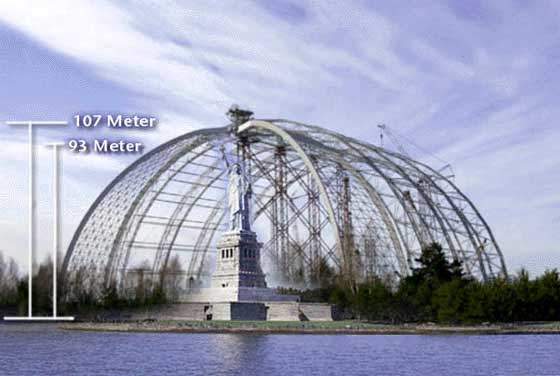 The vast scale of CargoLifter's hangar base is shown here relative to the Statue of Liberty.

The CargoLifter CL 160 is a semi-rigid airship under development by CargoLifter AG, a German company that plans to build airships capable of carrying enormous loads for the bulk air freight market. In May 2002, the CL 160 development was halted due to financial problems and the status of the programme is uncertain. In June 2002, the company made an application for insolvency. In August 2002, work on Cargolifter’s other major programme, the CL 75 lifting balloon was also halted.

Heavy loads, for example, large turbine casings, can be carried directly from the factory to their intended operation location, without the airship touching the ground and almost independently of local infrastructure. Described as a ‘flying crane’, the CL 160 will be able to carry payloads weighing up to 160 metric tons, with a volume of up to 3,200 cubic metres, to a range of up to 10,000 km, without the need for airfields or extensive road systems. The CL 160 could also be used in transporting humanitarian and emergency aid – one CL 160 could transport food for 25,750 people for 14 days in a relief programme.

The development took place at the dock in Briesen-Brand near Berlin, where the production hangar (360m long, 210m wide and 107m high) is the world’s largest free-standing hangar. A small scale (1:8) experimental airship known as ‘Joey’ was already built and had its maiden flight in October 1999.

Contraves Space AG of Switzerland is to develop the fibre-composite nose cone. BAE Systems Controls of the USA will develop the airship’s avionics and flight control systems. General Electric will supply the propulsion engines and Eaton Corporation the hydraulics.

In February 2002, the Preliminary Design Review (PDR) was completed, confirming the technical feasibility of the project, leading to the next stage in its development, the Detailed Design phase.

The Cargolifter CL 160 is a semi-rigid or keeled airship in which the envelope is not stretched over a rigid structure but has a keel which is attached to the bottom of the envelope and distributes the weight of the payload along the length of the envelope. The airship gains lift through the use of helium gas and therefore only requires energy for forward propulsion. It will be filled with 450,000m³ of helium.

The envelope is constructed of highly leak-proof multi-layer membranes which minimise the loss of helium. The material is lighter, more stretchable and durable and less inflammable than previously available materials.

The keel is made of aluminium. Integrated on the keel are the four-engine pylons, inferior lateral empennage, load frame, control and navigation centre, crew cabins, cruising and manoeuvring engines, fuel, hydraulic and electrical systems.

The airship’s load exchange procedure makes use of a new, specially developed technology, allowing it to load and unload without landing. The airship hovers at about 100m above the ground and a special loading frame, which is fixed during a flight to the keel of the airship, is then rigged with four cable winches to the ground, a procedure which is to assure that the airship’s lifting gear stays exactly above the desired position. Ballast water is then pumped into tanks on the frame and the payload can be unloaded. The anchor lines are released and the frame is pulled back into the payload bay of the airship.

The load exchange procedure permits a wind velocity of up to 10m/s steady or +/- 5m/s for gusts, comparable to that of a similar capacity modern crane.

A so-called ‘Multibox’ was specially developed for storage onboard the airship. This container can be loaded and unloaded from all sides. It is 50m long and 8m high and wide. It has a volume of 36, 40ft standard containers, which are used on cargo ships and lorries. Furthermore, the CargoLifter will also be able to hold and transport parts as big as 50 x 8 x 8m.

The CL 160 will be powered by eight CT7-8L turboshaft engines from General Electric Aircraft Engines, which propel 6m propellers. Four engines are for cruising and are mounted on pylons either side of the keel. The other four are only in operation for manoeuvring. The two forward engines are moveable to produce vertical thrust. There are also an additional five ‘rudder type’ engines for steering – two forward, two lateral and one vertical at the stern.