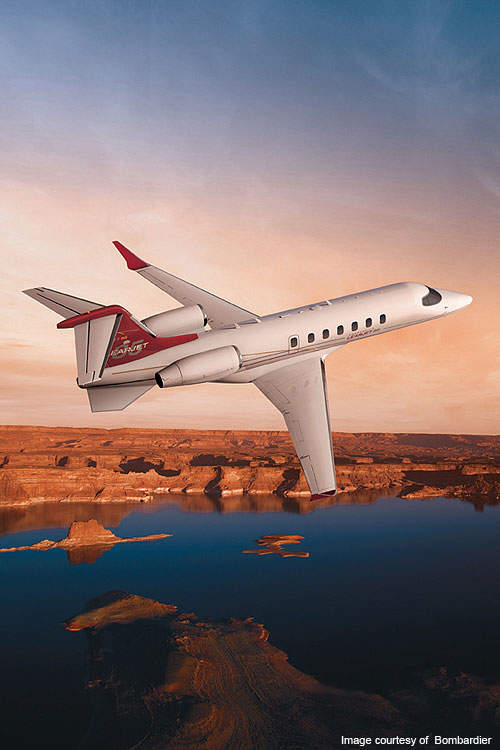 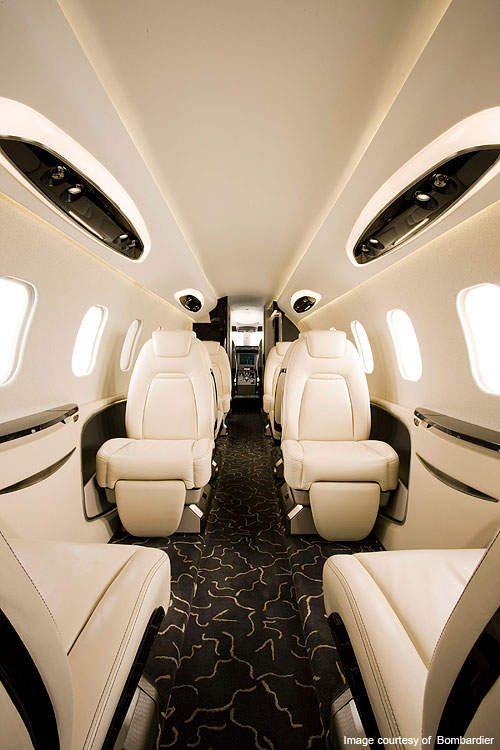 The cabin of Learjet 85 is large and spacious. 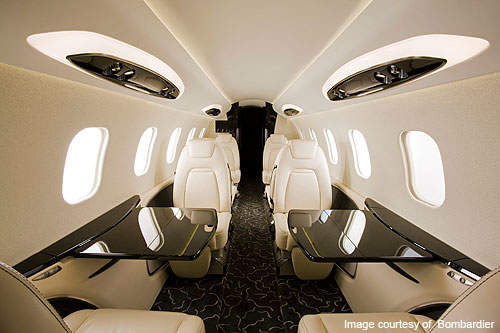 The seating arrangement in Learjet 85. 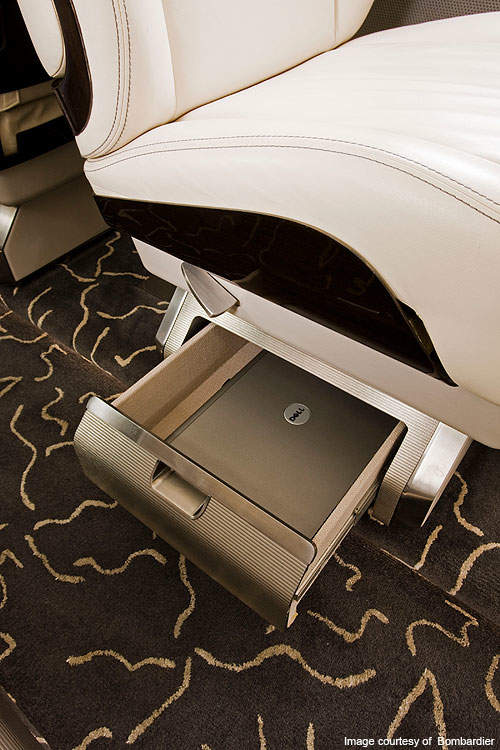 The Learjet 85 development programme by Bombardier Aerospace commenced in October 2007. The Learjet 85 has featured between the mid-size and the super mid-size sections. It will be the first Bombardier Aerospace jet to have an all-composite structure and will also be the first world-class all-composite structure jet planned for type certification under FAR (Federal Aviation Regulations) Part 25.

Bombardier initially selected Grob Aerospace to help to formulate the structure and construct the first three prototypes for the program but later Bombardier terminated the program as Grob Aerospace became bankrupt in late 2008. Bombardier later took over the responsibility for the elaborated design and construction of all the main and secondary structures for the Learjet 85 prototypes.

The programmes, like technology readiness, prelude design review, joint definition phase exit, vital design review, and FAA and EASA certification are scheduled to be completed in order to allow first customer delivery in the second half of 2015. The first flight was completed in April 2014.

In August 2010, Bombardier commenced the production of the Learjet 85 business jet at its Wichita facility. It plans to invest $600m in the facility. The investment also includes $27m from Kansas state in the agreement, which will be used for improvements that will help to develop a paint facility for the aircraft, production flight test unit and customer delivery centre. The company will also expand production air docks for the final assembly of the mid-size business jet.

All the main structural elements of the Learjet 85 will be manufactured in Querétaro, Mexico. These sub-assemblies will be then transported to Wichita for final assembly, production flight examination and painting.

"In August 2010, Bombardier commenced the production of the Learjet 85 business jet at its Wichita facility."

The interiors are designed rendering more cabin choices and a bigger range of floor plan options. It has options such as a 3-place divan and a deluxe galley to optimise comfort in flight. There is a distance of 30in between each seat, which allows the passengers to stretch their legs and relax.

The structural design validation of Learjet 85 is completed and the certifications are scheduled to be received by the end of 2014.

The lavatory of the Learjet 85 consists of flawless aesthetics. Its comforts include a spigot and sink with supercharged water flow and vanity cabinet with lighted mirror.

Each seat in the aircraft features ready-to-utilise passenger control units that interface with a digital cabin electronic system (CES). The passengers can use optional features such as a DVD player, HD monitors, XM Satellite radio capability and can also use personal media devices.

Rizon (headquartered in Bahrain) has ordered four Learjet 85s in February 2009. A Learjet 85 was ordered by Synergy Aerospace in August 2008.

Learjet will be delivered as a fragmental programme to Flexjet where the aircraft in the Flexjet fleet are subjected to extremely frequent use, which should become an excellent proving ground for the Learjet 85. The necessary adjustments, if any, will be made afterwards. After the changes are made the first deliveries to external customers will begin in the second half of 2015.

The Learjet 85 provides a large, spacious and sophisticated cabin than current jets in the mid-size category. The cabin has fully reclinable seats, which increase the comfort of passengers.

The cabin has a length of 22ft 7in, maximum height of 5ft 11in and a maximum width of 6ft 1in. The interior features unprecedented baggage and storage space.

The cabin also consists of 14 large windows of size 12 x 16in, which provide natural light and striking views in-flight. The cabin can seat up to ten passengers even if a divan is installed. There is also a 100ft³ external baggage space and 30ft³ of interior space available in the Learjet 85.

Flight deck of the Bombardier plane

The PW307B engine provides power to operate from coast-to-coast. It is one of the greenest engines, and combines superior fuel efficiency and first-class strength with a low noise signature. The engines are located on either sides of the fuselage and are controlled by a full authority digital engine control (FADEC) system. An engine diagnostic system (EDS) is included in the FADEC as a feature.

The engine can provide up to 6,100lb of thrust coupled with the Learjet 85 aircraft’s first-class aerodynamics.

Bombardier Aerospace awarded the landing gear contract for Learjet 85 to Héroux-Devtek, a Canadian manufacturer, in June 2008. As per the terms of the agreement, Héroux-Devtek provided design, build, manufacture, set up, examine and deliver the landing gear structure and actuation for the Learjet 85 aircraft. This life-cycle mandate is also included with the provision of spare parts.

The construction of the Learjet 85 aircraft in Quéretaro is advancing according to the plan. The first tooling is done at the Quéretaro facility.

This unit will be used to formalise the design concepts, manufacturing processes and quality as the program advances towards the beginning of production, which is scheduled for later this year.

Learjet is manufacturing the complex structure for the Learjet 85 utilising the production facility in the Quéretaro Aerospace Park, Mexico.

The product design and manufacturing development is taking place at three sites. Bombardier Montreal is handling the detailed structural design of the Learjet 85.

The Wichita facility is responsible for final assembly, systems consolidation, flight testing and on time customer delivery. Quéretaro is providing complex construction of the fuselage and wing. It will also provide electrical harness manufacture and sub-assembly systems fitting of the aircraft.

The wind-tunnel testing was conducted at the NIAR (National Institute for Aviation Research in Wichita).

The fuselage structure, which was constructed with the help of a Global Express fuselage mold, is bigger than the 85 design. It is examined and inspected for quality with respect to design thinking, process and material. This information is fed back into the design process. With this input, the design is altered before production tooling.

The Learjet 85 is fitted with the Rockwell Collins Pro Line Fusion avionics suite, which complements the Learjet 85 flight deck with key features, such as a synthetic vision system using the largest high-resolution displays available, a progressive human-machine interface and a broad array of new communications, navigation and surveillance capabilities.

"The construction of the Learjet 85 aircraft in Quéretaro is advancing according to the plan."

In addition to this the Pro Line Fusion incorporates information management technologies that relieve many maintenance and flight functional tasks, increasing efficiency.

The aircraft is fitted with terrain awareness and warning system (TAWS), which alerts the pilot while passing through high terrains and mountains. It also contains a synthetic vision system (SVS), which will significantly increase situational awareness regardless of the weather conditions or time of the day. It also has MultiScan weather radar, which gets its next stage of technology upgrading to this size of aircraft.