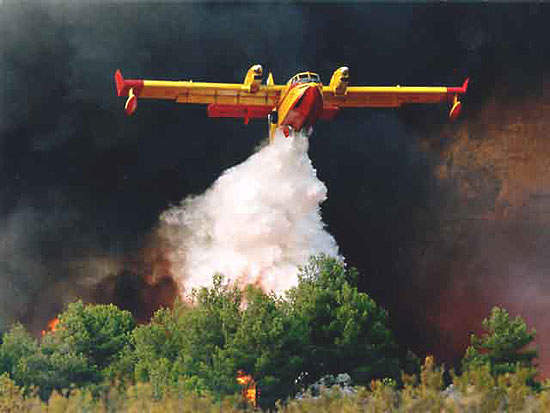 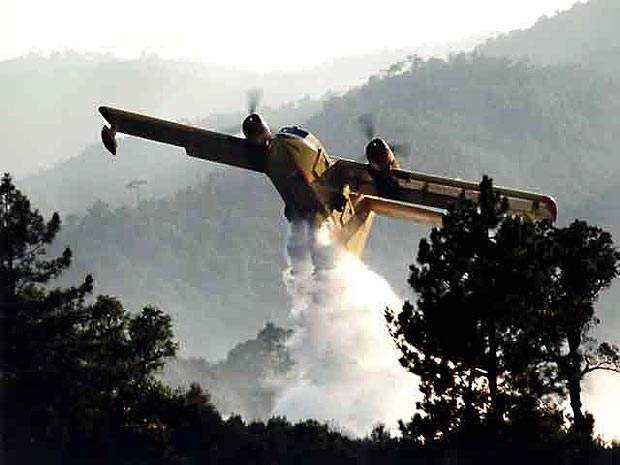 The Canadair 415 is known in the firefighting service as the Superscooper. 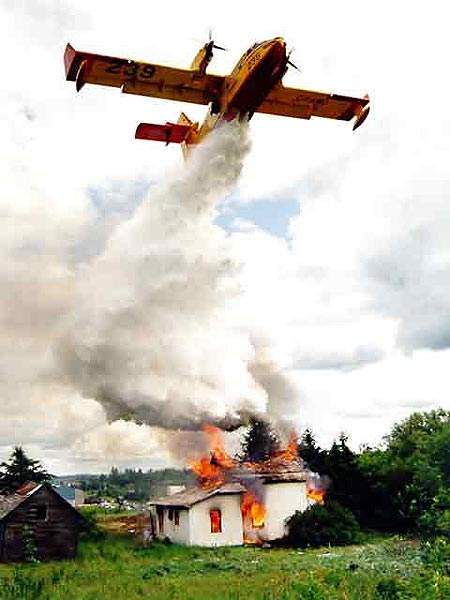 The Canadair 415 aircraft can remain on station for up to three hours, dropping typically nine tank loads of water on a fire. 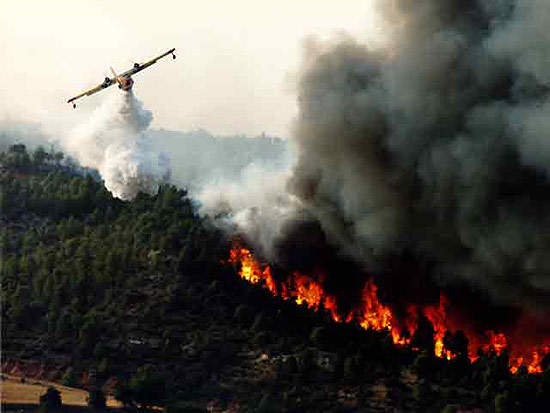 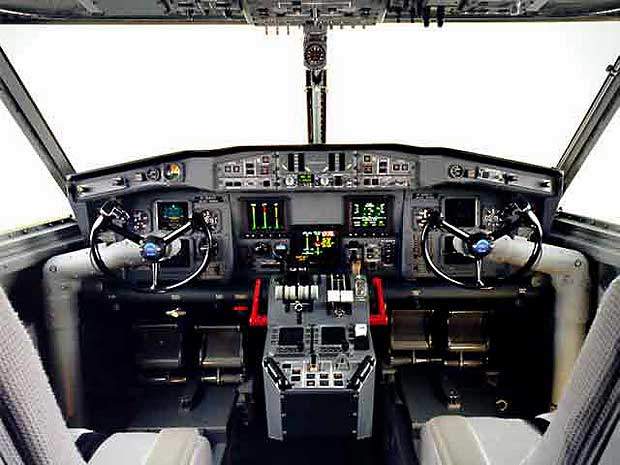 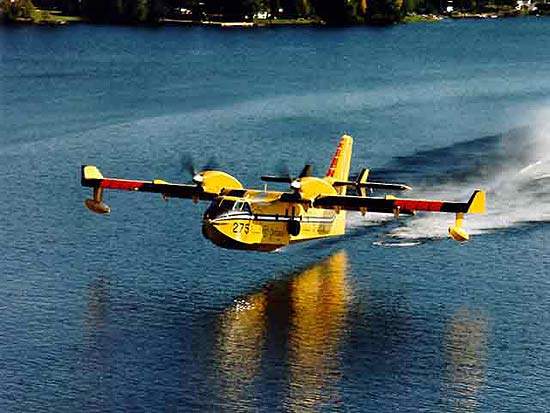 Stabiliser floats are mounted on pylons on the undersides of the wings. 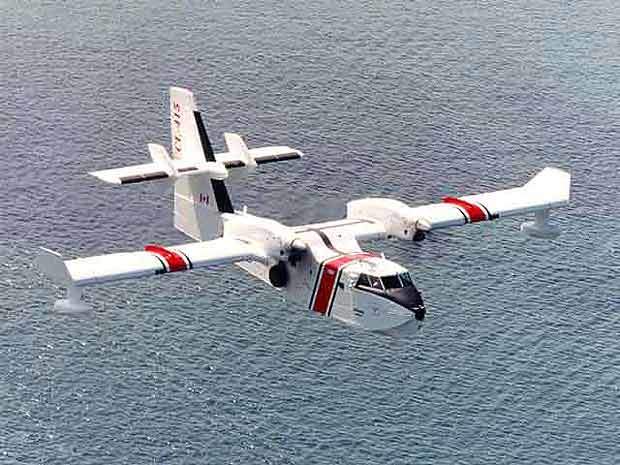 A search and rescue variant. 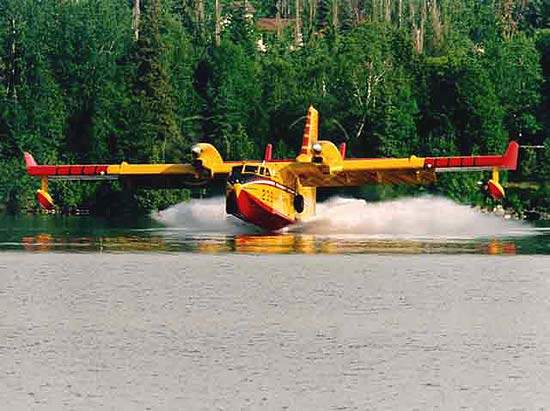 The water tanks are filled in flight while skimming over the water surface via two hydraulically operated scoops. 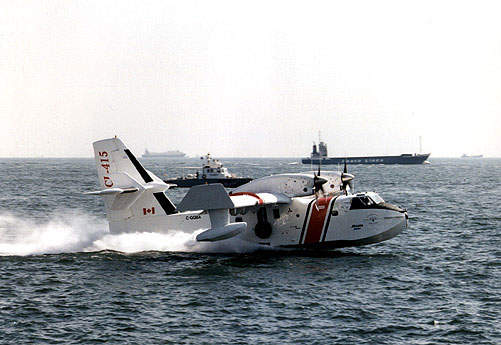 The water tanks can be filled in 12s by the scoops. 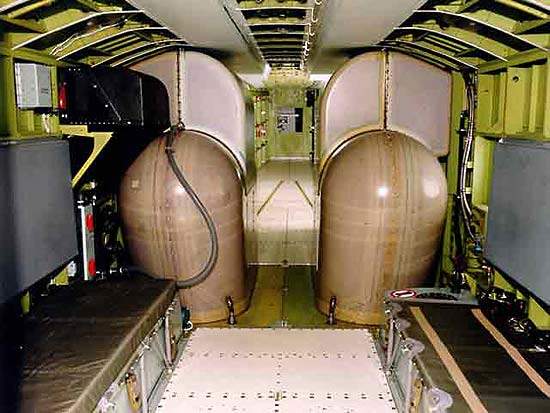 Four water tanks installed in the main fuselage compartment have a capacity of 6,137l. 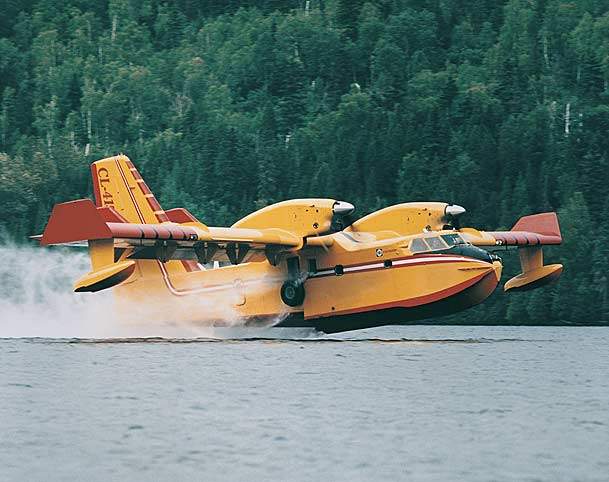 The Canadair 415 is also capable of adaptation to a variety of roles, such as maritime surveillance, search and rescue.

The Bombardier Canadair 415 amphibious aircraft was launched in 1991. The aircraft first flew in 1993. 65 aircraft have been delivered to the governments of France (13), Québec (eight), Italy (17), Croatia (four), Ontario (nine), Greece (ten) and Spain (one). The 415 has also been evaluated by the US National Guard.

The Canadair 415, well known for its use in the firefighting service as the Superscooper, is also adapted to a variety of specialised missions, such as maritime surveillance, search and rescue and personnel transport. Superscooper is a Canadian and US registered trademark.

The Amphibious Aircraft division of Bombardier, based in Montréal, is responsible for the marketing, sales and product support of the Canadair 415.

The layout of the interior of the fuselage for the firefighting variant of the aircraft provides seating for eight crew members on inward-facing four-man folding seats on either side of the forward cabin.

Four water tanks installed in the main fuselage compartment have a combined capacity of 6,137l. A hose adaptor is installed on each side of the fuselage to fill the tanks while the aircraft is on the ground. The tanks are filled in flight while skimming over the water surface via two hydraulically operated scoops, located aft of the hull step.

With the aircraft skimming over a distance of 1,340m (including safe clearance heights), the water tanks can be filled in 12s by the scoops. For safe scoop-filling operations, for example from a lake, the water should have a depth greater than 1.40m.

In a firefighting mission, the Bombardier Canadair 415 aircraft can remain on station for up to three hours, dropping typically nine tank loads of water on a fire, refilling from a water source 10km away.

A spray kit can be fitted to the tanks for large area spraying of pesticides, defoliants and oil dispersant chemicals.

The 415 MP (Multi-Purpose) variant has been developed for a range of roles and missions, including maritime surveillance, and search and rescue. The 415 MP made its maiden flight in March 2002.

Greece placed orders for two 415 MP aircraft for operation by the Hellenic Air Force and the first aircraft was delivered in March 2004. The aircraft, which will be based at the Elefsis Air Force Base, are fitted with a maritime surface surveillance system, Ericsson side-looking airborne radar, a FLIR Systems SeaFLIR forward-looking infrared, a Honeywell Primus 660 weather and sea search radar, rescue beacon transponders, digital imagery, autopilot system and Have Quick secure radios. It can also deploy a jet boat that can carry rapid intervention teams of five at speeds at over 80km/h.

“The water tanks can be filled in 12 seconds by the scoops.”

The CL-415 aircraft, a cantilever high-wing monoplane, was designed around the airframe of the CL-215 aircraft. The CL-415 has a higher operating weight than the CL-215 for increased firefighting capability. The fuselage is a fail-safe all-metal single-step flying boat hull incorporating several watertight compartments.

Stabiliser floats are mounted on pylons on the undersides of the wings near the wingtips. The wings are fitted with endplates to improve the aircraft’s lateral stability. The aircraft is fitted with a powered rudder, ailerons and elevators.

The aircraft has a cantilever all-metal fail-safe tail unit. The horizontal tailpieces are mounted halfway up the vertical fin. The control surfaces of the tail unit are constructed of honeycomb panels and the surface of the tail is aluminium alloy sheet.

Two water scoops are installed behind the planing step. The aircraft has a firefighting drop system composed of four independently openable water doors.

The aircraft is powered by two Pratt & Whitney Canada PW123AF turboprop engines, each providing a power of 1,775kW. The engines are mounted in damage-tolerant nacelles. The engines drive Hamilton Standard 14SF-19 propellers. The four-bladed constant speed, fully feathering, reversible-pitch propellers are of diameter 3.97m (13ft 0.25in).

The two fuel tanks, with a total usable capacity of 5,796l, are installed in the wing spar box. Each tank comprises a set of eight flexible fuel cells. There are gravity refuelling points on the upper wing and a single pressure refuelling point on the starboard side of the rear fuselage.

The twin-wheeled nose landing gear is steerable, self-centring and retracts rearwards. The nose unit housing in the hull is enclosed by conformal doors. The tubed nosewheel and the tubeless main wheels are equipped with hydraulic disc brakes.