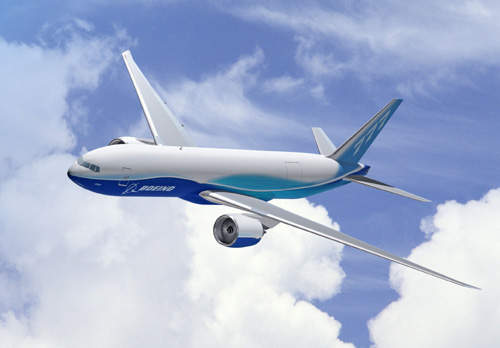 The Boeing 777F freighter is based on the 777-200LR Worldliner passenger aircraft and includes a state-of-the-art flight deck, fly-by-wire system, advanced wing and raked wingtips. 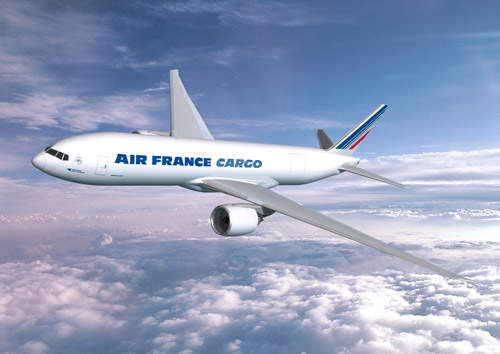 The official launch of the Boeing 777 Freighter was held on 24 May 2005. Air France has ordered five 777 Freighters with options for three additional aircraft. 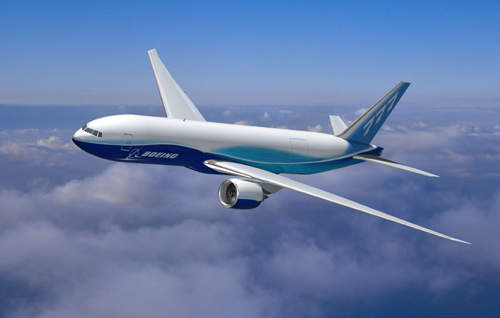 The Boeing 777F has a range of 4,895 miles (9,065km), allowing operation between city pairs such as Los Angeles and London, Tokyo and San Francisco and Paris and Hong Kong. 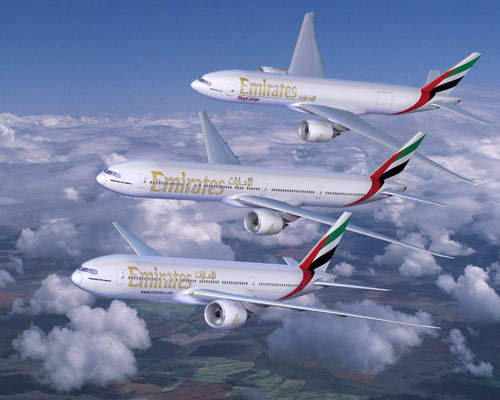 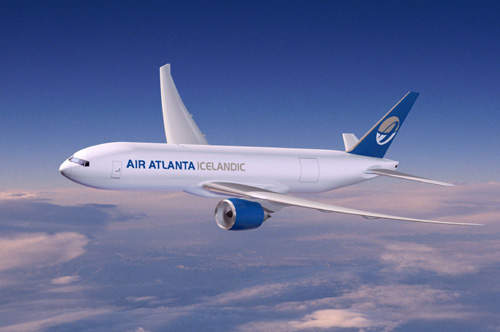 Iceland's Avion Group became the second customer for the Boeing 777 Freighter in September 2005. The freighters will be operated by Air Atlanta Icelandic, the world's largest Aircraft, Crew, Maintenance and Insurance (ACMI) service provider. 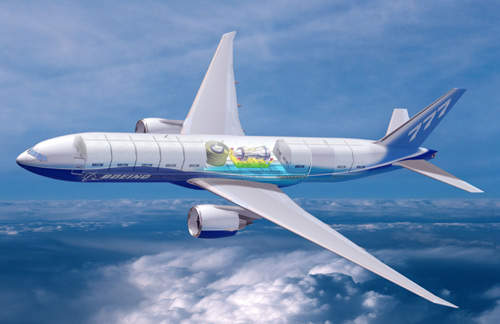 The Boeing 777 freighter accommodates up to 27 standard pallet-sized loads on its main deck, ten pallets in the lower cargo hold and an additional 17m&sup3; (600ft&sup3;) of bulk cargo.

The Boeing 777F Freighter is based on the 777-200LR (Longer-Range) Worldliner passenger liner. The first flight of the Worldliner took place in March 2005 and Pakistan International Airlines (PIA) received the first passenger aircraft in February 2006. Air France is the launch customer for the 777F Freighter version, having placed an order for five freighters in May 2005.

“The first 777 Freighter was delivered to Air France in February 2009.”

The 777 Freighter has a full payload range of 9,065km, allowing operation between typical city pairs such as Los Angeles and London, Tokyo and San Francisco and Paris and Hong Kong. The manufacturer has announced that the aircraft is the world’s longest-range twin-engine freighter.

The maximum take-off weight for the new cargo airplane will be 347,450kg with a revenue payload capability of 103.9t. The aircraft will accommodate 27 standard pallets (244cm x 318cm) on the main deck, ten pallets in the lower cargo hold and 17m³ (600ft³) of additional bulk cargo.

The freighter’s operational design complements the 747 cargo operations with easy direct-transfer shipments. The main cargo door on the 777 Freighter is sized to allow easy interlining with the 747 freighter, with the capability to accommodate the transfer of 10ft-high (3m) pallets between the two cargo airplanes.

The 777 Freighter is the sixth and newest model of the Boeing 777 family of aircraft and is based on the 777-200LR Worldliner.

The changes to the freighter variant include the strengthening of certain airplane structures and removal of passenger-related items such as windows and doors and the installation of a main cargo deck door, monolithic aluminium floor and a rigid cargo barrier in the forward part of the aircraft.

The aircraft has an enhanced, lightweight, powered cargo handling system with built-in test equipment that continually monitors the operational health of the system and a manoeuvre load alleviation system which helps to distribute the load on the aircraft while in flight.

The 777 Freighter has high commonality with the passenger models of the 777 family and shares advanced features such as: state-of-the-art flight deck, fly-by-wire design and an advanced wing design that includes raked wingtips.

Boeing manufactures the flight deck and forward section of the cabin, wing, tail and engine nacelles, but subcontracts the manufacture of some components and systems, which are transported to Boeing for final assembly and tests. Subcontractors include Alenia in Italy, ASTA in Australia, Bombardier Shorts in UK, Embraer in Brazil, Mitsubishi Heavy Industries of Japan, Kaman in USA, Korean Air, Northrop Grumman in USA and Singapore Aerospace.

The aircraft has Boeing’s fly-by-wire controls with flight envelope protection and automatic pilot and stabilisation functions. The fly-by-wire system sends back-driven signals to the pilots’ rudder pedals and control columns to provide the pilot with sensory awareness of the activities of the automated systems.

The aircraft can be fitted with a Honeywell and Racal satellite communications system.

“Boeing has announced that the aircraft is the world’s longest-range twin-engine freighter.”

The aircraft has two pod-mounted turbofan engines below the leading edges of the wings. The General Electric GE90-110B1 engines are maximum rated at 489kN thrust and will meet QC2 noise standards for accessibility to noise-sensitive airports.

The main fuel tanks are installed in the wing torsion box with the reserve and surge tanks on the inboard side of the wing. There is also a centre section tank and additional fuel tanks in the rear cargo hold.

Control of the steering rear axles is automatically linked to the steering angle of the nose gear. The main landing gear is fitted with Honeywell Carbenix 4000 brakes. Initial activation of the brakes during taxiing applies the brakes to alternate groups of three wheels in order to minimise wear on the brakes.