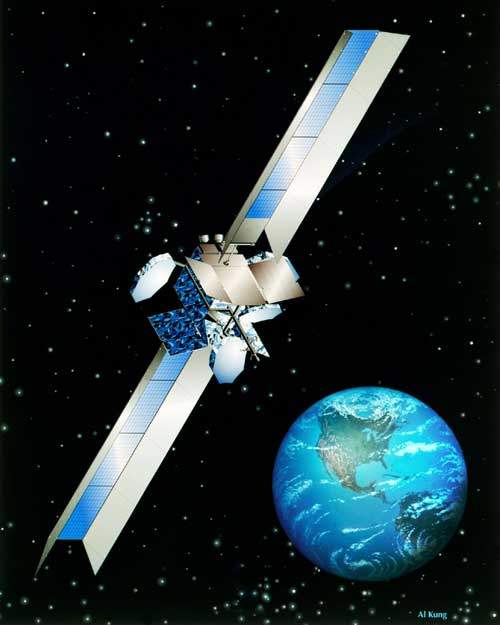 The Boeing 702 is the successor to the Boeing 601 (which is the world's most widely used satellite). 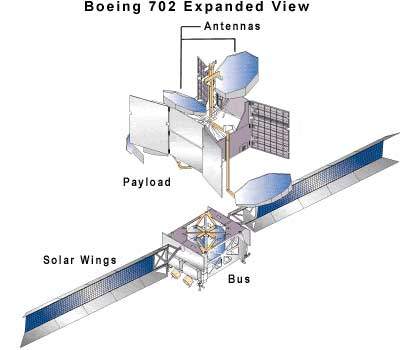 This diagram shows the structure of the Boeing 702. 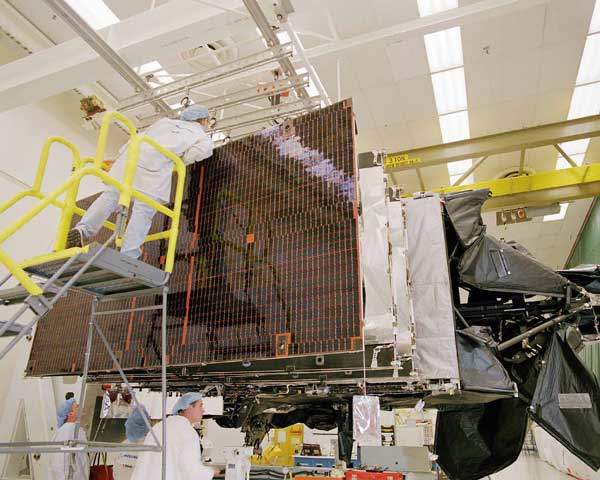 A Boeing 702 satellite being prepared. This was to be used for digital radio broadcasting. 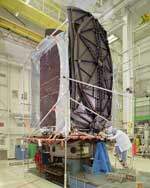 This Boeing 702 called 'Roll' is being prepared for launch.

In October 1995, Hughes Space and Communications, now Boeing Satellite Systems, announced a new satellite series, called the Hughes 702. Evolved from the proven Hughes 601 and 601HP (high power) spacecraft, the body-stabilised Hughes 702 is a giant in size, performance and cost efficiency. The satellites are now known as the Boeing 601, 601HP and 702.

Hughes Communications, which merged with PanAmSat Corporation in May 1997 to create the world’s largest privately owned communications satellite company, was the first customer for the new model. The Galaxy and PAS fleet chose the 702 satellite to expand their video distribution, telephony and data services in North and Latin American markets.

Boeing received a second major contract from SkyTerra for two 702HP satellites, including an option for a third, in 2006.

In March 2010, Boeing Space & intelligence systems announced that it will market 702 satellites by two different names: Boeing 702HP for the high-power version and 702MP for Medium-power version.

The Boeing 702 can carry up to 118 high-power transponders (94 active and 24 spares), and is capable of delivering any communications frequencies required.

A broad spectrum of modularity (the payload / bus integration, for example) makes the Boeing 702 deliver improved customer value and productivity while lowering the cost.

The payload module mounts to the common bus module at just four locations with six electrical connectors, after the payload is being tailored to customer specifications. Such design simplicity offers major cost advantage as non-recurring programme costs are reduced since the bus need not be changed for every payload, and payloads can be freely tailored without the bus being affected. Furthermore, the simpler design significantly speeds up bus and payload processing simultaneously.

The cost and speed advantages lead to a short production schedule, which is the third major advantage with the satellite series.

Since more mass is conserved by using the XIPS system, compared to that of an on-board liquid apogee engine, the weight savings can be applied to prolong service life, or to increase the revenue generating payload at small marginal cost, or to shift to a less-expensive launch vehicle in cases where satellite mass is critical to the cost.

Further, the bipropellant propulsion, which helps to lift the satellite into final orbit after separation from the launch vehicle, added more versatility to the Boeing 702

An innovative feature on the Boeing 702 is its solar power system, which consists of angled solar reflector panels along both sides of the wings. Together, the panels form a shallow trough and concentrate the sun rays on the solar cells that power the satellite.

Dual and triple-junction gallium arsenide solar cells developed by Spectrolab, a subsidiary of Boeing, offer a range of power up to 25kW in the ‘Plus’ version of the Boeing 702.

The baseline Boeing 702 is compatible with already-launched, as well as soon-to-be-available launch vehicles, including the Atlas V family, Delta IV, Ariane 4 and 5, Proton and Sea Launch.