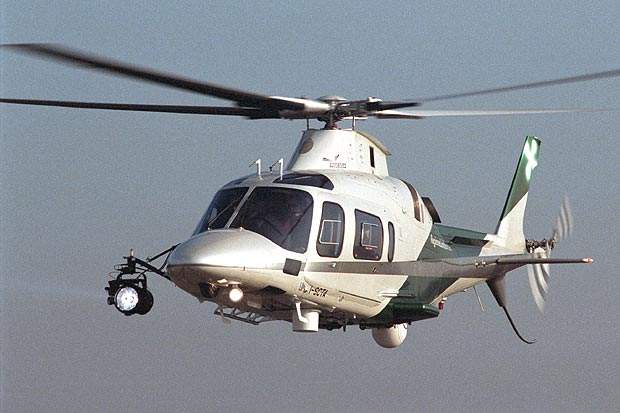 AW109 Power in service with the Milan Police Force, leased to them by Avianord. 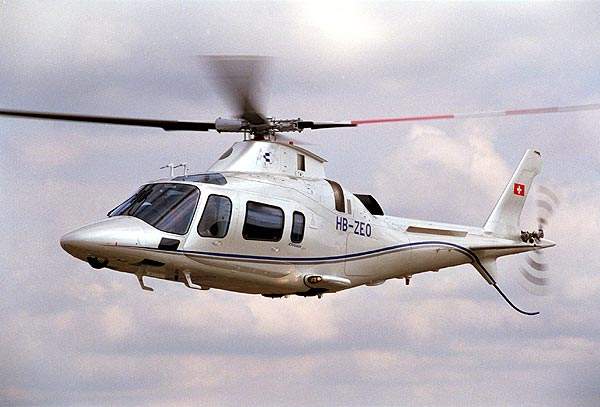 More than 300 AW109 Power helicopters have been ordered. 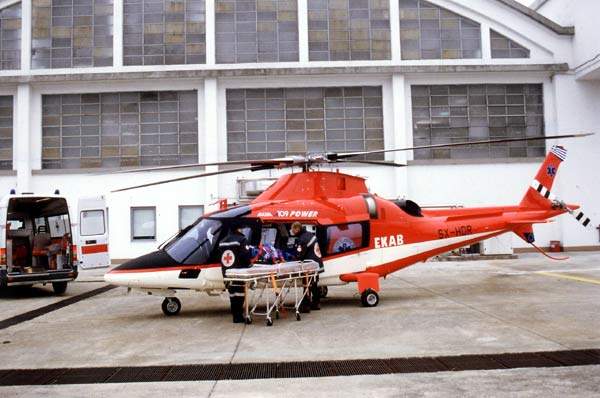 The cabin can be quickly converted for an emergency medical evacuation role. 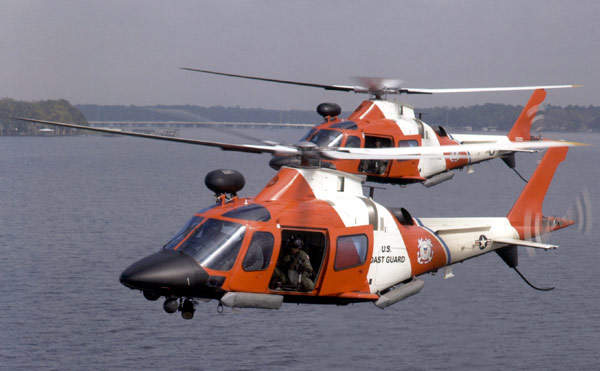 The armed MH-68, a dedicated version of the AW109 Power, in service with the US Coastguard. 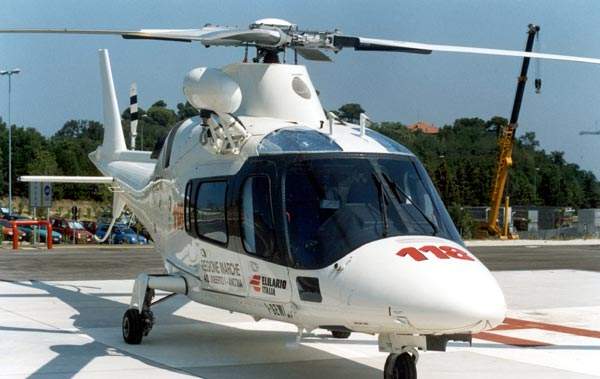 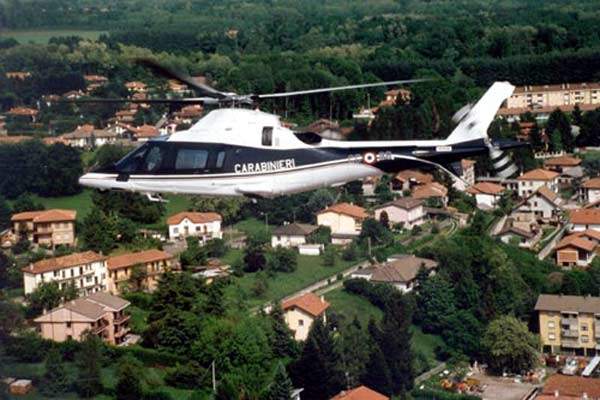 Law enforcement version in service with the Italian Carabinieri. 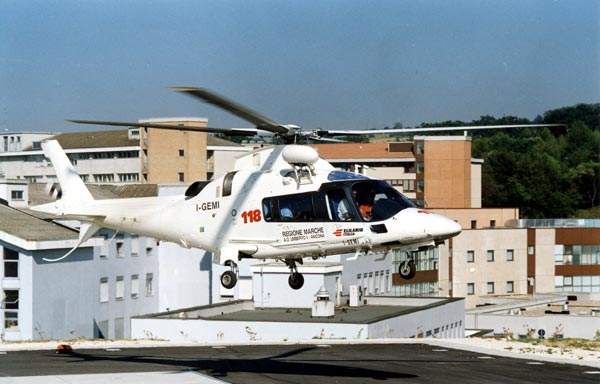 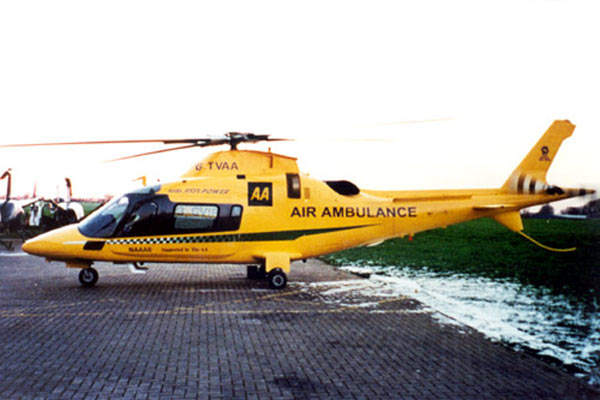 The AW109 was originally developed as an ambulance and rescue helicopter to operate in mountainous regions of Switzerland.

The helicopter can fly from critically situated landing spots in adverse climates and from roof helipads in densely populated areas.

The AW109 Power first flew in 1995 and entered service in 1997. More than 470 were ordered by more than 50 countries worldwide for police, EMS (emergency medical services), VIP / corporate and military applications.

The 32 (Royal Squadron) of the UK Royal Air Force placed an order for three helicopters in May 2005. The helicopters entered service with the RAF in March 2006 and are used in the VIP transport and communications role.

“The AW109 was originally developed as an ambulance and rescue helicopter to operate in mountainous regions of Switzerland.”

The New Zealand Ministry of Defence awarded a €54m contract to AgustaWestland in May 2008 for five A109 light utility helicopters (LUH) and a flight simulator.

The Royal New Zealand Air Force revealed its first three of five A109 LUHs and a new hangar to park it in in May 2011 during a ceremony held at the Ohakea Air Base. The three AW109 helicopters are the first lot to replace the Bell 47 Sioux trainers. These AW109 LUHs were reassembled at the Ohakea Air base.

In October 2009, the Japan Alpen ordered an AW109 helicopter for VIP / corporate transport purposes. AgustaWestland and Kaigai Aviotech Corporation of Japan have signed a distribution agreement to supply the AW109 and AW119Ke to Japan.

Ten helicopters were ordered by the Libyan Government in January 2006 for border patrol. AgustaWestland, Finmeccanica and the Libyan Company for Aviation Industry set-up a joint venture, LIATEC to be based in Tripoli, for local assembly.

In June 2006, two AW109 helicopters were ordered by the Latvian Border Guard and three for the Beijing Public Security Bureau for use during the 2008 Olympic Games (first delivered July 2007). In October 2006, the Chilean Carabineros ordered four helicopters. The Egyptian Ministry of Defence ordered three AW109 Power helicopters for its air force.

The Public Security Bureau of Nanning (Southern China) awarded AgustaWestland a contract to supply one AW109 Power light twin-engine helicopter in October 2009. The helicopter is being used for law enforcement and civil protection / disaster relief purposes across the Guangxi Zhuang Autonomous Region.

Variations of the AW109

The AW109E Power helicopter can be configured as a passenger helicopter for four or six passengers. The cabin can be quickly converted for an emergency medical evacuation role. It can be fitted with four seats for medical attendants and a litter for a single stretcher patient. A second litter can be stowed in the baggage compartment to the rear of the main cabin.

The latest variant is the AW109S Grand, a stretched version, which has a maximum take-off weight of 3,175kg and cabin length of 2.3m. First deliveries of the AW109S Grand were in June 2005.

The police helicopter is operational with police forces, including those in the UK, Dubai, Italy, Japan and China.

The cockpit can be equipped with a global positioning navigation system, weather radar and the customer’s choice of frequency-modulated secure communications.

The optional equipment includes a forward-looking infrared and a low light level television camera for surveillance, observation and search, a Spectrolab SX-16 searchlight, a retractable MA3 lighting kit and loudspeakers.

The police helicopter can also be fitted with various lifting systems such as a 907kg cargo hook, a variable speed rescue hoist fitted with a 50m cable and capable of lifting 204kg. Safety systems include a rappelling kit, wire strike protection and emergency floats.

The cockpit is night vision compatible. The helicopter has a lifting hook rated at 907kg and Spectrolab SX-16 searchlight.

The tricycle-type wheeled landing gear is fitted with air and oil shock absorbers for ground mobility and operation on rough terrain.

The composite main rotor blades are ballistic tolerant for high survivability and reliability. The rotor is negative-g capable for high manoeuvrability. The tail rotor is a two-bladed stainless steel semi-rigid type.

Cockpit on the AW109 Power helicopter

The flight control system includes a collective, cyclic and anti-torque system. The cyclic and collective controls are powered by two hydraulic systems.

The anti-torque control system is hydraulically powered. A dual redundant three-axis stability augmentation system is fitted as an option.

An optional Rockwell Collins cockpit management system is provided for monitoring and operating different avionics via one or more centrally located control and display units.

Engines of the light multirole helicopter

Each engine is equipped with independent fuel and oil systems and independent engine controls.

The transmission system is rated at 900hp for improved high-temperature and high-altitude performance. For enhanced safety and reliability the helicopter has a 640hp single-engine emergency rating and the dry run capability is 30 minutes, allowing the pilot the opportunity to find a safe landing spot in the event of oil loss.

There are three fuel systems configurations, three cells of 605l, four cells of 710l and five cells of 870l. A crashworthy fuel system, with closed-circuit refuelling and self-sealing fuel tanks can be fitted as an option.

The helicopter is fitted with two independent flight control hydraulic systems, each capable of operating main actuators in case of failure of the other system.

The utility hydraulic system has two accumulators (a normal and an emergency accumulator) to operate the rotor brake, the wheel brakes and the nose wheel centring device.

Performance of the Italian-manufactured AW109

The AW109 helicopter can climb at the rate of 9.8m a second. The maximum and cruise speeds of the helicopter are 311km/h and 285km/h respectively.

The service ceiling of the AW109 is 5,974m and the maximum endurance is four hours and 51 minutes. The helicopter weighs around 1,590kg and the maximum take-off weight is 3,000kg.