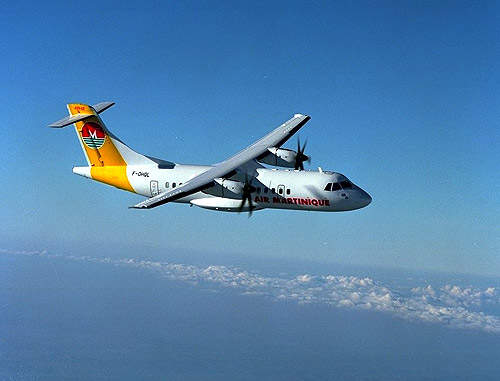 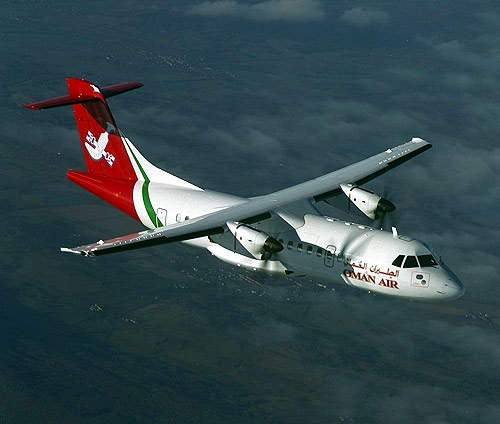 An ATR 42-500 with Oman Air. The -500 series has new engines and propellers, improved hot and high performance, increased weight capacity and an improved passenger cabin. 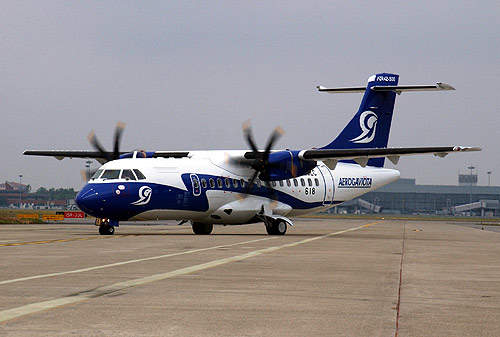 The ATR 42-500 can operate on short and unpaved runways. 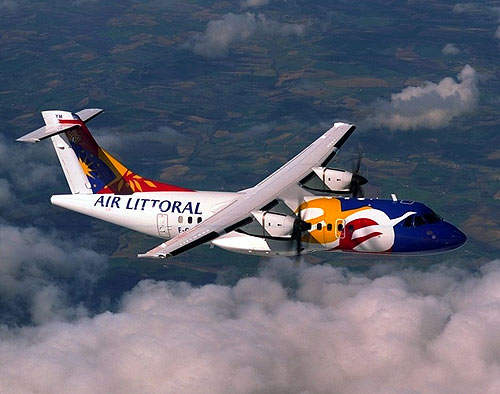 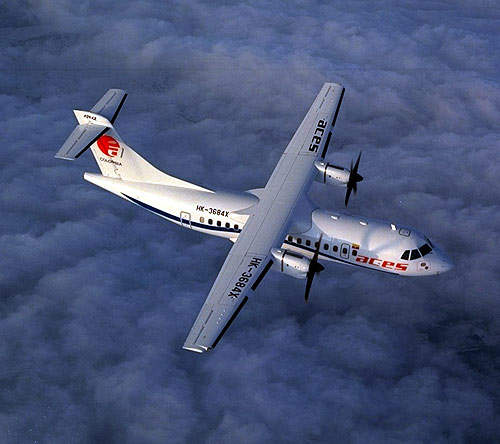 More than 370 ATR 42 aircraft (shown here in service with ACES Colombia) have been delivered. 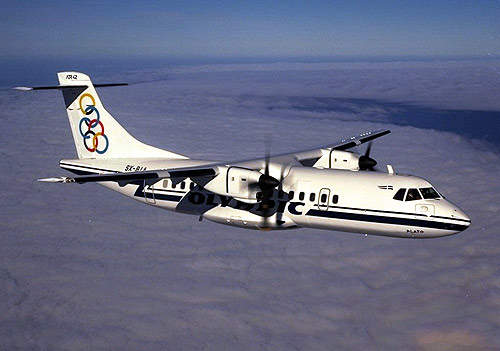 Olympic Airways of Greece operates a number of ATR 42 aircraft.

The ATR 42-500 is one of a family of twin turboprop passenger aircraft developed and manufactured by Avions de Transport Regional (ATR). ATR, with headquarters in Toulouse, is a joint venture company between EADS and Finmeccanica / Alenia Aeronautica.

"The ATR 42-500 is one of a family of twin turboprop passenger aircraft developed and manufactured by Avions de Transport Regional (ATR). ATR is a joint venture company between EADS and Finmeccanica / Alenia Aeronautica."

The orders for the ATR 42 include: Finncomm Airlines (eight plus eight options), Air Caledonie (two) and Air Madagascar (one), placed in June 2005, Pakistan International Airlines (seven), placed in November 2005 and Precision Air of Tanzania (three) in August 2006. In July 2010, Nordic Aviation Captial awarded a contract to ATR for seven ATR-42 aircraft. ATR 42-500 was delivered to NordStar Airlines in March 2011.

In October 2007, ATR launched the new 600 series of ATR 42 and ATR 72 aircraft. The new aircraft is equipped with a Thales Avionics glass cockpit, new PW 127 M engine and light-emitting diode (LED) lighting in the cabin.

A variant for maritime patrol, the ATR 42MP Surveyor, is in service with the Italian Guardia di Finanza (three aircraft) and coastguard (two aircraft).

The Surveyor can be fitted with search radar, a Galileo Avionica mission system, Elettronica electronic support measures (ESM), forward-looking infrared (FLIR) and a TV camera. The aircraft can spend up to eight hours on station, at 200nm from base.

In June 2007, Nigeria ordered two 42MP variants. The first ATR-42MP was delivered to the Nigerian Air Force in December 2009. The second was delivered in March 2010. Libya ordered one in January 2008 and the Italian coastguard ordered one additional aircraft in February 2008.

The ATR 42-500 is certified to operate on unpaved runways through installation of a kit to ensure landing gear and lower fuselage protection. Special cold weather procedures allow operation down to temperatures of -54°C.

The ATR aircraft family is certified for low external noise performance according to FAR Part 36 and CH.3 ICAO Annex 16, ensuring compliance well within the current and CH.4 noise regulations.

The aircraft is a high-wing monoplane with a semi-monocoque fail-safe fuselage built of light alloy. Composite materials, such as carbon monolithic structure, carbon / Nomex sandwich and Kevlar / Nomex sandwich, are extensively used and represent 19% of the total weight of the structure.

Alenia Aeronautica is responsible for the manufacture of fuselage, tail units and installation of landing gear.

The wings are manufactured and tested at EADS Sogerma, in Bordeaux. ATR has full responsibility for final assembly and delivery to customers.

The ATR 42-500 can carry up to 50 passengers in a four abreast, centre-aisle configuration. The standard configuration includes two cargo compartments.

ATR has developed a quick change kit which provides the capability to reconfigure the cabin in 30 minutes to carry ATR-specific containers using the standard front cargo door.

The kit allows the aircraft to be operated as a passenger plane during the day and as a cargo plane during the night. Each optimised container has a 2.8m³ volume and can carry freight up to a total weight of 500kg. ATR 42 can carry up to nine ATR containers.

Alenia is responsible for the design of the cargo conversion kit which converts the aircraft to a freighter. Aeronavali, a subsidiary of Alenia, is the selected outfitter for the aircraft.

"As of December 2011, ATR had received orders for 1,074 aircraft and 927 aircraft were delivered. ATR aircraft are in service with 165 operators in 92 countries."

At present, 30 ATR cargo are in service with 12 operators, while 27 ATR 42-320 for FedEx are under conversion. Only two of these aircraft have been equipped with the large cargo door: one ATR 72 operated by Farnair and one ATR 42 flown by Northern Air Cargo Alaska. The FedEx aircraft are equipped with the standard cargo door.

The two integral fuel tanks can carry 5,700l of fuel.

Landing gear onboard the ATR aircraft

The aircraft has a hydraulically retractable tricycle landing gear. The landing gear legs are provided by Messier, wheels and brakes by Dunlop, antiskid control by Crane Hydro-Aire and tyres by Michelin (or optionally Goodyear tyres for operations on unpaved runways).

A Magnaghi hydraulic system provides landing gear retraction and also serves other systems in the aircraft.