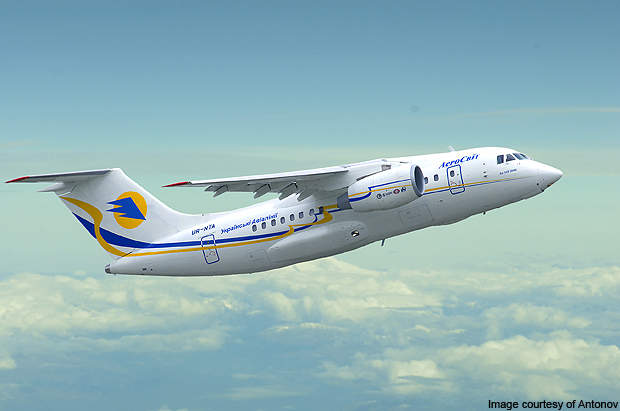 The Antonov An-148 is a twin-engine regional passenger aircraft. 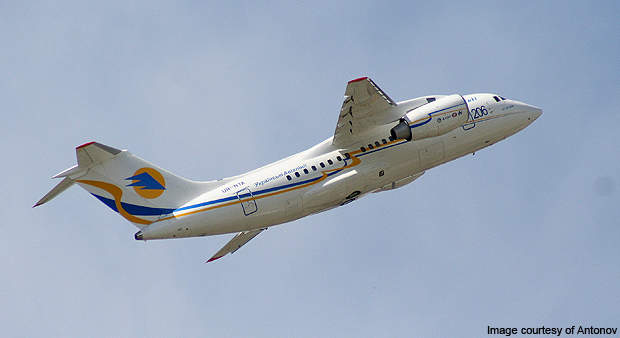 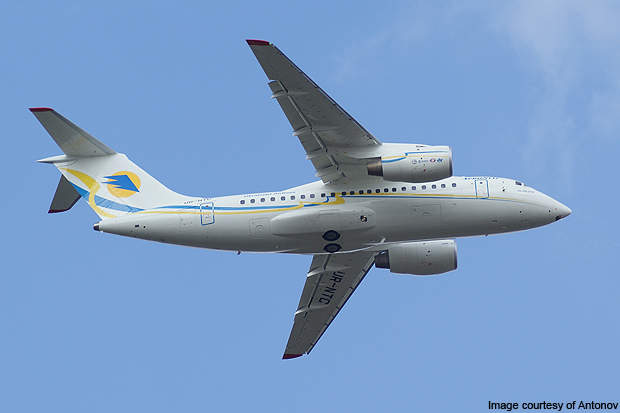 The first order for the Antonov An-148 was received from Ilyushin Finance (IFC).

The An-148 is a high-wing monoplane with turbofan jet engines mounted in pods under the wing. 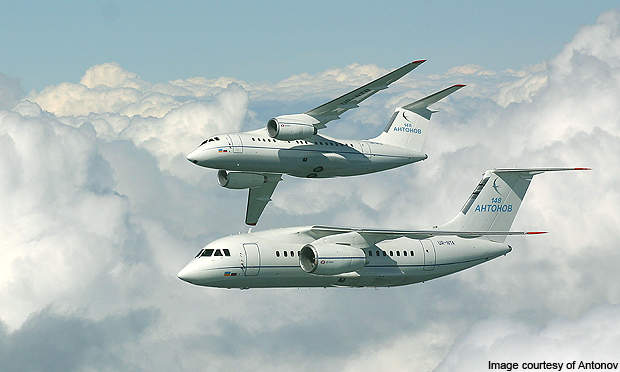 The first international commercial flight of An-148 was made from Odessa to Moscow on 13 December 2009.

Antonov built two An-148 prototypes in 2004 and 2005. The first prototype is being operated by Aerosvit Airlines and the second was stretched in 2009 to create the An-158 (An-148-200). The first order was received from Ilyushin Finance (IFC) in April 2005. Seven aircraft are in production at Aviant, while VASO delivered three aircraft to Kyiv aggregates.

In June 2009, Atlant-Soyuz Airlines signed a memorandum of understanding for 30 An-148 jets. In November 2010, the Russian Emergency Ministry ordered two An-148-100 jets to be manufactured by UAC’s VASO plant. Deliveries are planned for 2012 and 2013.

“The Antonov An-148 is a twin-engine commercial aircraft.”

An-148-100 is passenger aircraft with extended range of up to 4,400km with up to 85 seats. All the variants have similar airframes.

Other variants of the class include the stretched fuselage version An-158 or An-148-200, the business variant An-168 and the cargo variant An-178.

The An-148 incorporates a high-wing monoplane design. It has the highest weight efficiency in its class due to the usage of titanium alloys in structural components.

Two turbofan jet engines are mounted in pods under the wing. This arrangement protects the engines and wing structure against damage from foreign objects (FOD). The state-of-the-art aircraft systems and the wing configuration allow the aircraft to use all types of aerodromes including poorly equipped airfields.

The aircraft is equipped with bullet-proof doors and anti-thief devices. Additional space is provided for weapon and ammunition storage.

The An-148 features a partial glass cockpit which can accommodate four crew members. The cockpit is equipped with five 6in×8in multifunction LCDs developed by Aviapribor and fly-by-wire flight controls.

The onboard video surveillance system allows the crew to monitor the passenger compartments and service areas.

“The An-148 incorporates a high-wing monoplane design.”

Closable over-head shelves are available for hand luggage. The 4.2m³ space allocated for these shelves is the biggest in the class of regional and short-range aircraft.

The baggage and cargo compartments of 14.6m³ are provided under the passenger compartment floor and in the tail part. The noise level in the cabin is very less and meets all international aviation standards.

The An-148 is powered by two high bypass D-436-148 turbo fan engines developed by Ivchenko-Progress. Each engine provides a maximum take-off thrust of 6,830Kgf. Automatic control and monitoring systems optimize the performance of the engine.