Antonov's fleet of An-124s has been increased to eight with a possible ninth aircraft in the pipeline. 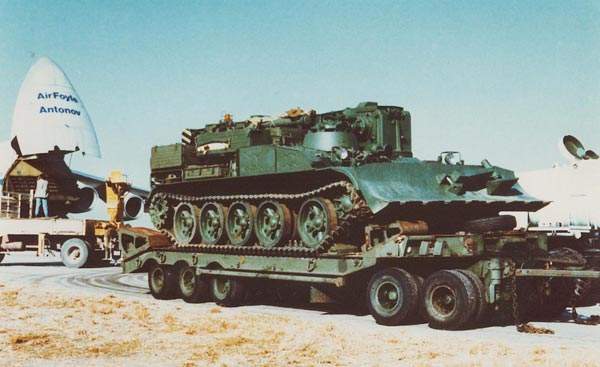 An-124-100 transporting 110t of mine clearance equipment and relief supply to Southern Angola for a charitable organisation. 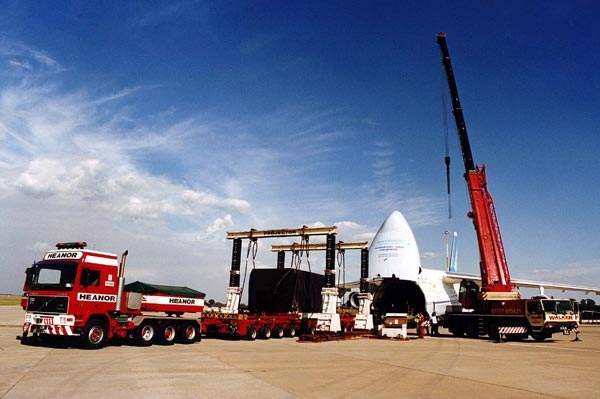 The An-124 is designed for long-range delivery and air dropping of heavy and large-size cargo, including machines, equipment and troops. 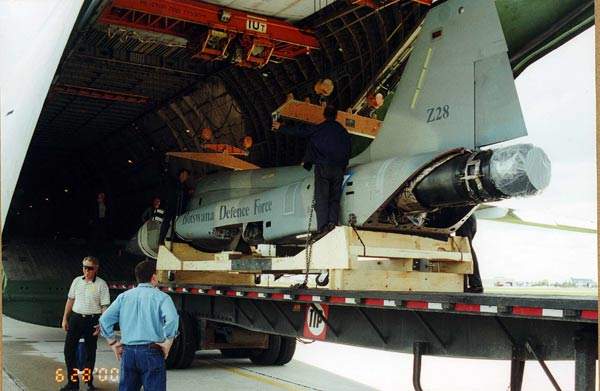 An-124 loaded with an F-5 fighter of the Botswana Defence Force. 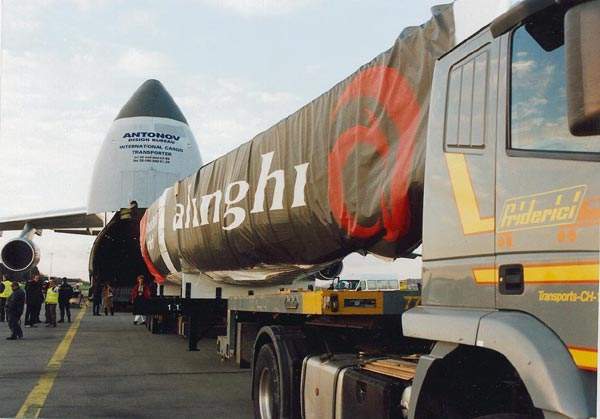 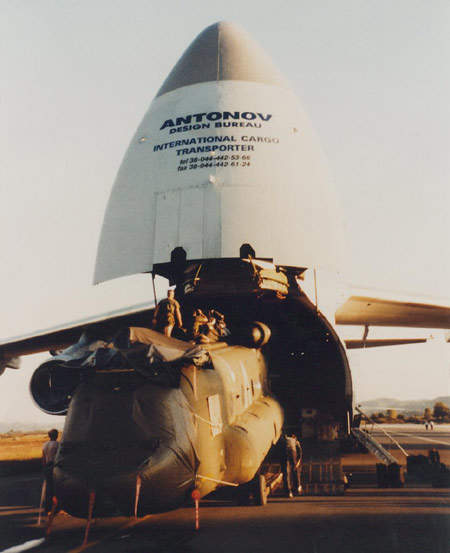 Three Chinook helicopters of the Dutch Air Force were transported in one An-124 by Antonov Airlines. The Chinooks were part of the UN mission in Kosovo and Albania. 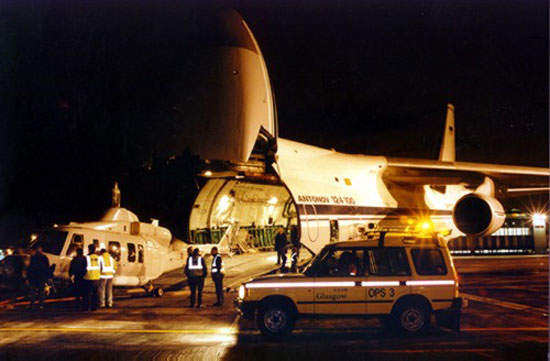 Bell 214ST helicopter being loaded into an Air Foyle / Antonov An-124 freighter. 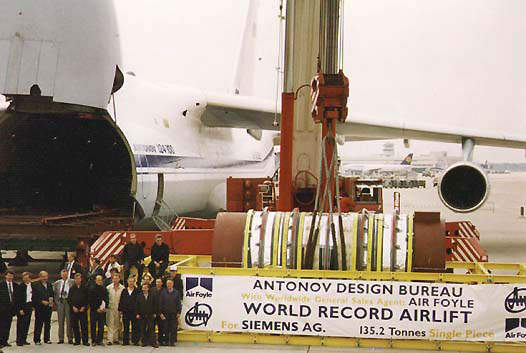 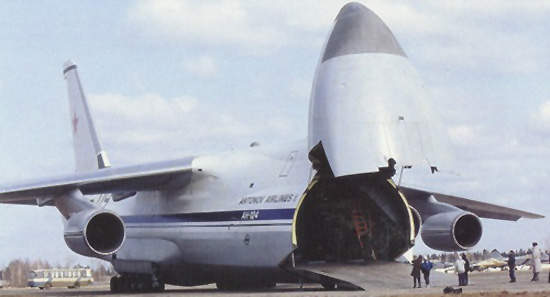 The fuselage nose can be hinged upwards to open the front cargo hatch. 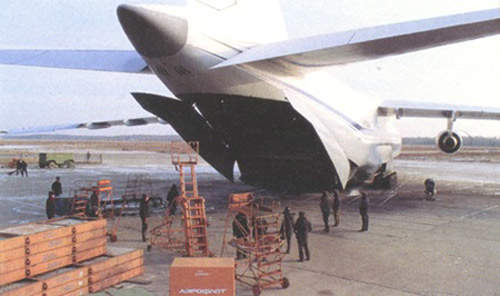 There is a cargo hatch in the rear fuselage to speed up the cargo loading and unloading. 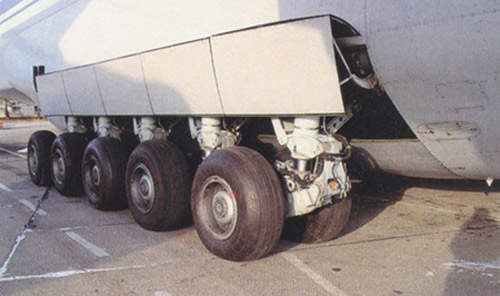 The An-124 Ruslan, designed by the Antonov ASTC in Kiev, Ukraine, is a very large cargo aircraft with a payload capacity of up to 150t. It is manufactured by the Aviant State Aviation Plant, Kiev, and Aviastar, Ulyanovsk, Russia.

The aircraft is designed for long-range delivery and airdropping of heavy and large-size cargo, including machines, equipment and troops. The aircraft is based on the An-124 Ruslan military transport in service in the Russian Army, which has the Nato reporting name Condor.

Aviant State Aviation Plant in Kiev completed an An-124-100 from parts in stock which was sold to the United Arab Emirates in 2004.

Antonov signed an agreement with Volga-Dnepr Airlines in August 2011 to modernise the fleet of An-124-100 Ruslan into An-124-111VD standard. The overhauled aircraft will have a maximum take-off weight of 402t, a cargo lift capacity of 150t, a flight range of 5,000km with a 120t payload and a minimum crew of three.

It will be powered by advanced 3M series D-18T engines compatible with the full authority digital engine control system.

A new version, the An-124-100M-150, is developed by Aviastar with investment from the International Finance Corporation. The aircraft payload is increased from 120t to 150t, the take-off weight increased from 392t to 402t and the flight range with 120t cargo increased from 4,650km to 5,400km.

“The An-124 Ruslan, designed by the Antonov ASTC in Kiev, Ukraine, is a very large cargo aircraft.”

The crew is reduced to four. A digital anti-skid braking system is fitted with monographite wheel brake disks. The aircraft features a new avionics suite supplied by Honeywell of the USA and Aviapribor and Leninets of Russia.

In September 2004, the governments of Russia and Ukraine announced that series production of the An-124 would be restarted. Up to 80 An-124-100M upgraded aircraft are to be jointly manufactured by Aviastar and Aviant between 2007 and 2020.

Volga-Dnepr Airlines placed an order for five An-124-100M in August 2005. Deliveries did not commence as of August 2011 and are expected to begin soon. Supplemental type certification was received for the aircraft in June 2007, allowing operations with 402t maximum take-off weight and 150t maximum payload.

United Aircraft Corporation (UAC) signed an agreement with Volga-Dnepr Airlines in 2008 to supply 40 An-124-100M aircraft. Deliveries are expected to conclude by 2027.

In February 2006, Nato signed a contract to lease the An-124, under the Strategic Airlift Interim Solution (SALIS), from Ruslan SALIS GmbH (representing Antonov and Volga-Dnepr).

Two aircraft are constantly based at Leipzig airport and four more are optional. The lease is for an initial three years, to be renewed yearly until 2012 when the A400M transport enters service. The Leipzig maintenance base was opened in January 2007.

The US Air Mobility Command has been chartering An-124 aircraft from Volga-Dnepr since 2003 for the transport of oversize cargo.

The unique transport capabilities and the high performance of the aircraft were proven in operation. The An-124 served several nations in the transportation of economically important cargoes, for example, 90t hydraulic turbines, large size Liebherr auto cranes, American Euclid dump trucks, the fuselage of Tu-204 passenger transporter, a 109t railway locomotive and a sea yacht more than 25m long.

The aircraft fuselage has a double-deck layout. The cockpit, the relief crew compartment and the passenger cabin for 88 seats are on the upper deck. The lower deck is the cargo hold. The flight deck has crew stations arranged in pairs for six crew, the pilot and co-pilot, two flight engineers, the navigator and communications officer. The loadmaster’s station is located in the lobby deck.

The An-124 aircraft is fitted with a relatively thick (12%) swept-back supercritical wing to give high aerodynamic efficiency and consequently a long flight range. To decrease the trim drag, the aircraft was designed with a low margin of static stability.

The construction includes extruded skin panels on the wing, extruded plates for the centre-section wing panels and monolithic wafer plates for the fuselage panels. The aircraft structural members are made of composites that make up 1,500m² of the surface area, giving a weight saving of 2,000kg.

High rough-field capacity multileg landing gear and the loading equipment ensure self-sufficient operation of the aircraft on prepared concrete runways and on poorly equipped unpaved strips at forward airbases close to the areas of operations where the cargo is needed.

The landing gear is self-orienting and incorporates a kneeling mechanism which allows an adjustable fuselage clearance to assist the loading and unloading of self-propelled equipment.

The aircraft has para dropping and cargo-handling equipment and a 1,000-test point on-board automatic test system as well as two auxiliary power units equipped with electric generators and turbopumps for independent operation of the aircraft.

Avionics systems onboard the Antonov An-124-100

All systems are quadruple redundant.

The on-board equipment provides the capability to execute airlift and para drop missions by day and at night, in Visual Flight Rules and Instrument Flight Rules (VFR and IFR) weather conditions and in prolonged operation beyond the main basing airfield.

The systems include an integrated flight control and navigation system, communications facilities and para dropping and cargo-handling equipment.

There are 34 computers functioning aboard the aircraft, combined into four main systems, which are navigation, automatic piloting, remote control and monitoring.

The two cargo hatches are a distinctive structural feature. The fuselage nose can be hinged upward to open the front cargo hatch and there is a rear cargo hatch in the rear fuselage to speed up the cargo loading and unloading operations.

The onboard system of cargo handling equipment makes it possible to load and unload the aircraft without the help of ground facilities.

The para dropping and cargo-handling equipment comprise two travelling cranes, two winches, rollgang and tiedown equipment. The aircraft is often compared to the US Lockheed Martin C-5 Galaxy. The An-124 has a transportation capability 25% higher than that of the C-5A and 10% higher than the C-5B.