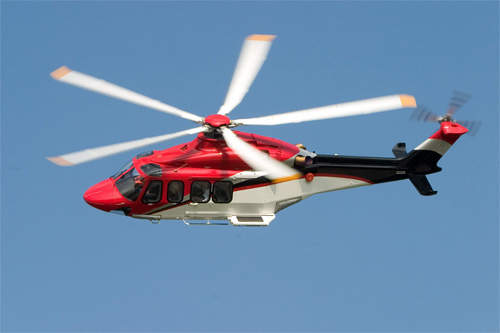 The AW139 (formerly known as the AB139) medium twin-turbine helicopter. 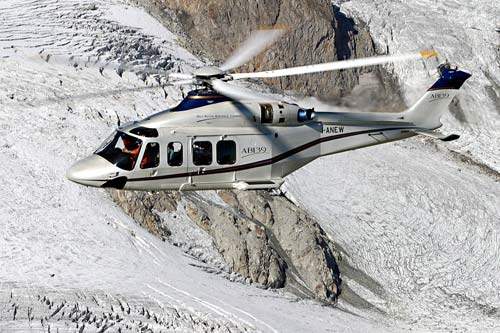 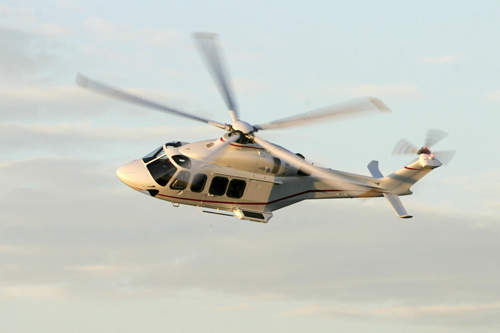 The AirGreen AW139 helicopter in a search and rescue configuration was used at the Winter Olympics in 2006, held near Turin. 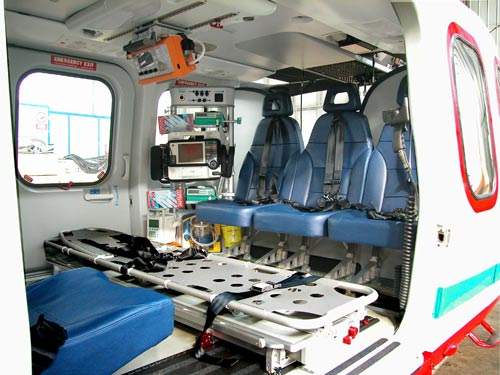 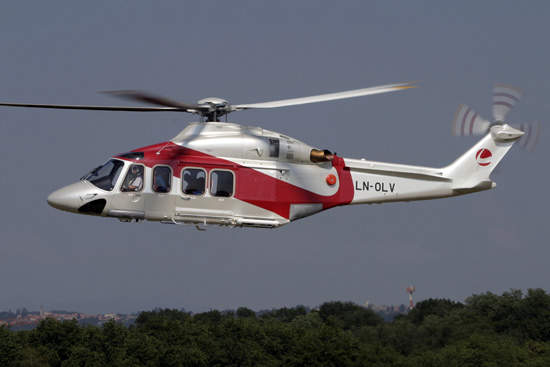 The AW139 is available in both civil and military configurations and is capable of carrying up to 15 passengers or 2,500kg (5,500lbs) useful load. 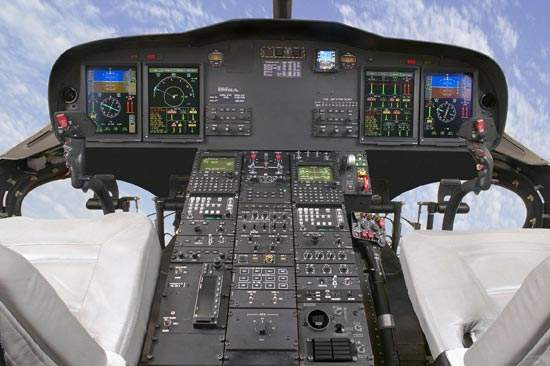 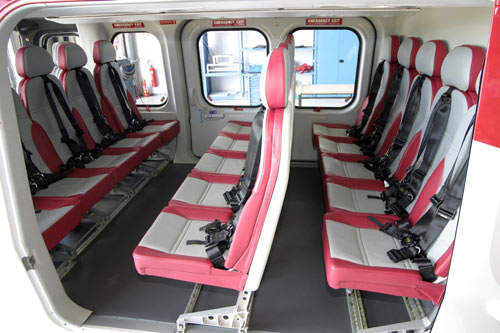 Interior of the AB139 in transport role. 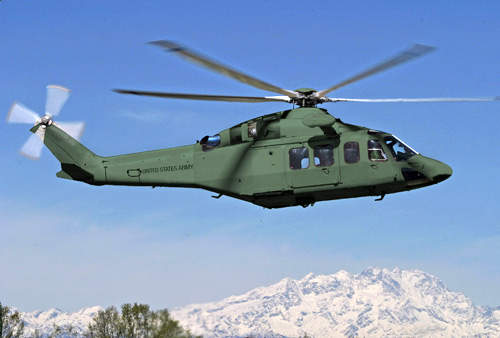 Impression of the US139 offered for the US Army's light utility helicopter requirement. 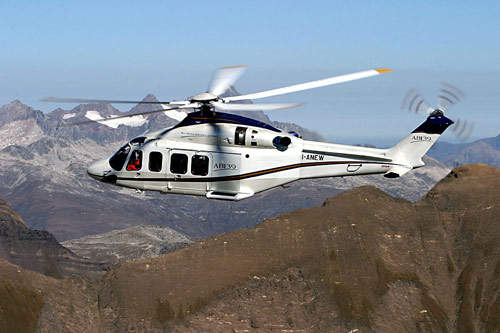 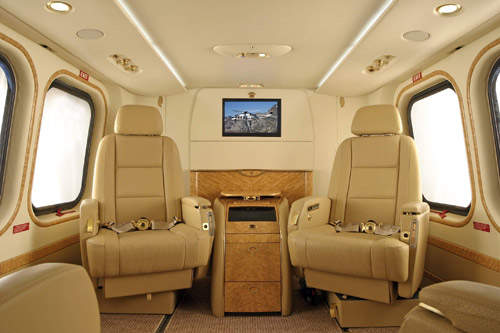 A configuration of the interior of the AW139 for VIP transport.

The AW139 (formerly known as the AB139) is a medium twin-turbine helicopter, which was developed by Bell Agusta Aerospace, a joint venture of Bell Helicopter Textron of the US and AgustaWestland.

In November 2005, Bell announced that it was selling its stake in the AB139 programme to AgustaWestland. Following the sale, the helicopter was renamed AW139 in February 2006.

The AW139 is available in both civil and military configurations and is capable of carrying up to 15 passengers or 2,500kg (5,500lb) useful load. Civil applications include passenger transport, law enforcement, utility and offshore oil support. Other roles include search and rescue (SAR), cargo lift and firefighting.

A number of international companies are involved in the programme, including Pratt & Whitney of Canada, Honeywell of the US, PZL Swidnik of Poland, Liebherr of Germany, Kawasaki of Japan and others.

The AW139, along with the BA609, is built at Agusta’s Final Assembly Line in Vergiate plant, Italy. An AW139 assembly line has been built at the Agusta Aerospace Corporation plant in Philadelphia, Pennsylvania. The first AW139 built at the new facility was delivered in December 2006. A second assembly line was added in February 2008.

All parts and components for both lines come from the same sources and the aircraft is identical whether assembled in Italy or in the US.

The first AW139 made its maiden flight in February 2001. Italian certification was granted in June 2003 and US certification in December 2004. The first AW139 helicopter was delivered to Elilario of Italy in March 2004 and the second to the government of Namibia in September 2004. The AW139 was selected by more than 100 customers for more than 430 helicopters. The 200th AW139 helicopter was delivered in December 2008.

“The AW139 (formerly known as the AB139) is a medium twin-turbine helicopter.”

AgustaWestland increased the maximum gross weight (MGW) of the AW139 to 6,800kg (14,991lb), a 400kg (882lb) increase on the current certified MGW of 6,400kg. The increased payload will make the AW139 more efficient for long-range offshore transport and search and rescue (SAR) operations. The increased MGW will be available on all new production aircraft as an option and as a retrofit. The AW139 with the weight increase is expected to achieve EASA certification by the end of 2008 with FAA certification soon after.

The Korean Coastguard ordered a third AW139 helicopter in the maritime patrol configuration in December 2009. During the same month, the Ministry of Finance and Interior of Bulgaria ordered an AW139 medium twin helicopter for the Bulgarian Border Police.

Two AW139 helicopters were delivered to Kazakhastan’s Euro-Asia Air in November 2009. The helicopters will be principally used for performing transport operations in Kazakhstan’s section of the Caspian Sea.

In September 2009, AgustaWestland was awarded a contract by Bristow Group for three AW139 helicopters. Bristow Group received two of the helicopters during the ceremony held at Philadelphia facility in December 2009.

Two helicopters entered service with the US Customs and Border Protection in August 2007. In July 2008, the Qatar Armed Forces placed an order for 18 AW139 helicopters and has received its first AW139 helicopter during the ceremony held at AgustaWestland’s Vergiate plant in Italy in November 2009. In October 2008, the Malaysian Maritime Enforcement Agency ordered three AW139 helicopters.

Italian Guardia di Finanza received its second aircraft in January 2011, the first was delivered in mid-2009. The Estonian Police and Border Guard received the third AW139 in February 201l. One AW139 was delivered to VTB Leasing in April 2011.

Recent orders include one for Guanxi Province Police and Saitama Perfecture of Japan (January 2011), one for India’s Adani Group, one for an undisclosed Indian customer and five for Gulf Helicopters of Qatar (February 2011), one for the Japanese Firefighting and Disaster Relief Organisation (March 2011), three for Portugal-based OMNI group (March 2011), eight for Exclases Holdings and three for Caverton Helicopters of Nigeria (June 2011).

The AW139 helicopter was selected by Integrated Coast Guard Systems (ICGS), a joint venture established by Lockheed Martin and Northrop Grumman, as part of their proposed aviation solution for the US coastguard deepwater programme. The AW139 would provide the VRS (VTOL recovery and surveillance aircraft) element and replace the HH-65 Jayhawk. The US coastguard decided to upgrade the HH-65 rather than procure new helicopters.

The US139 is being offered for the US Army’s light utility helicopter requirement. In February 2006 the helicopter was flown to the Cairns Army Airfield in Fort Rucker, Alabama for the LUH source selection performance demonstration (SSPD).

The AW139 military version is capable of carrying up to 15 troops or six stretchers with four medical attendants. It can be fitted with gun pods, rocket launchers and air-to-air missiles attached to two removable external supports.

In February 2011, AgustaWestland launched the AW139M, a customised military variant of the AW139. The AW139M features self-protection equipment such as infrared detection, armoured seats to improve crew protection and blast-resistant self-sealing fuel tanks.

Two large ‘plug-in’ type sliding doors allow easy access to the cabin. The large baggage compartment (3.4m³) is accessible from the cabin and externally through large doors on both sides.

The system architecture is built on two modular avionics units (MAUs) that house the processing for most of the functions within the system. By integrating the functions into an MAU, powerful computer processing can be shared to do multiple tasks that previously required individual computer platforms.

The system features a powerful central maintenance computer function that will provide operators with a high level of troubleshooting and system maintenance support. Maintenance personnel may use the cockpit displays or a laptop computer to perform aircraft rigging, sensor calibration and avionics systems diagnostics.

The engines have a maximum continuous power of 1,531hp (1142kw) each and give a maximum cruise speed of 290km/hr and a maximum range (without reserves) of 750km. Due to the power reserve of the engines, a safe flight is ensured with one engine inoperative (OEI) at maximum take-off weight.