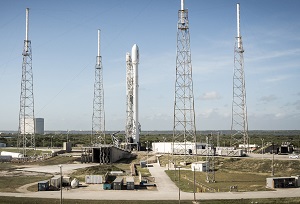 Falcon 9 launch system is configured as Falcon 9 upgraded and has become one of two launch providers certified to play a role in NSS missions.

The Space and Missile Systems Center at Los Angeles Air Force Base in California updated the certification based on recommendations made by the Independent Review Committee, after SpaceX demonstrated the capability to design, produce, qualify and deliver the launch system.

The upgrade certification emerges after the centre certified the Falcon 9 launch system for NSS missions in May 2025, allowing SpaceX to compete for Evolved Expendable Launch Vehicle (EELV) programmes such as GPS III launch services.

The 229ft upgraded version is taller and has more thrust than the previous version of the rocket. It burns a super-chilled mixture of liquid oxygen and rocket-grade kerosene colder than the propellants consumed on SpaceX’s earlier launches.

"This gives the Air Force confidence that the national security satellites will safely achieve the intended orbits with full mission capability."

"This gives the Air Force confidence that the national security satellites will safely achieve the intended orbits with full mission capability."

The upgrade certification emerges before the USAF is scheduled to announce the GPS-III satellite space launch contractor in March.

Lockheed Martin and Boeing joint venture United Launch Alliance (ULA), which is the only other company certified to compete for NSS launch programmes, withdrew from the GPS-III competition in November, citing restrictions over the import of RD-180 engines from Russia.

ULA’s withdrawal makes SpaceX a contender for the contract.