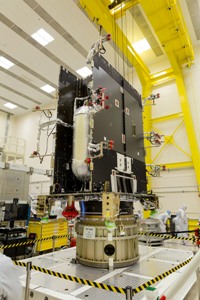 Each of the GOES-R series of satellites will carry six new instruments, including an advanced baseline imager (ABI), extreme ultraviolet and x-ray irradiance sensors (EXIS) and geostationary lightning mapper (GLM).

It will also carry a magnetometer, space environment in-situ suite (SEISS) and solar ultraviolet imager (SUVI), as well as the spacecraft and its antennas, flight hardware, software, and other components.

The instruments will provide high and increased resolution, advanced imaging and coverage for accurate environmental forecasts such as severe storms, fog, fire, aerosols and volcanic ash, as well as map lightning in real-time.

With the instruments, the Space Weather Prediction Centre of NOAA, which is a part of United States Department of Commerce, hopes to improve its space weather forecasts.

NOAA is involved in providing updates on conditions of the oceans and the atmosphere.

"Each of the GOES-R series of satellites will carry six new instruments."

Nasa said in a statement: "GOES-S recently completed the technical portion of its system integration review, in which an independent team, spanning several engineering disciplines, determined that the flight and ground segment components are ready for integration with the overall GOES system.

"The review team also assessed the readiness of the facilities, support personnel, plans and procedures for integration of the GOES-S satellite."

Nasa’s Maryland-based Goddard Space Flight Centre manages the GOES-R series programme, which is a combined effort between the space agency and NOAA. Both agencies are collaborating in developing, deploying and operating the satellites.

GOES-R is a follow-on to NOAA’s ongoing GOES system and other satellites in the GOES-R series, including GOES-S, T, and U which are currently under development. The launch dates for GOES-S, T, and U have not been set yet.

Following its launch, GOES-R satellite will be placed in 89.5°checkout orbit and it will operate from either 75° or 137° west position. NOAA’s Office of Satellite and Product Operations will give a final decision on the operational position of the satellite.

GOES-R will be operational immediately after completing an extended validation period of one year.