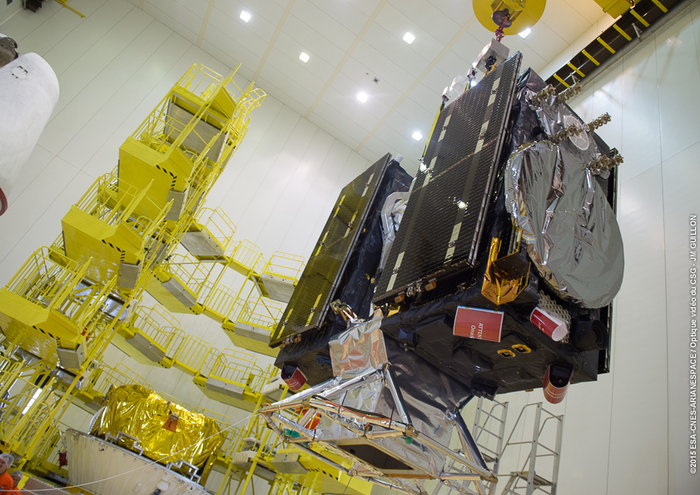 The ninth and tenth Galileo satellites have been installed on top of the Fregat upper-stage for launch aboard the Soyuz rocket on 11 September, from spaceport in French Guiana.

The pair was lowered onto the waiting upper-stage in the 3SB preparation building of the space centre.

Functional checks and inspections have been completed to encapsulate Galileos and Fregat within the halves of the Soyuz rocket fairing.

The upper composite will be moved to the launch site to attach it vertically to the first three stages of the Soyuz ST-B.

Once these achieve low orbit, the Fregat will carry the satellites to the designated medium-altitude orbit.

Named Flight Models 5 and 6 of the Full Operational Capability version, the navigation satellites will be placed at 23,222km orbital altitude and 57.394° inclination.

This will be the fifth Galileo launch, bringing the number of Galileo satellites in space up to ten.

Two more satellites are planned for launch by the end of this year.

The ESA’s ESTEC technical centre in Noordwijk, the Netherlands, is performing tests on one of the satellites, while the other is being prepared for transportation to Kourou in October.

The first satellite of the following batch (Galileo 13) is undergoing a thermal-vacuum test at ESTEC. The next one will reach the centre later this month.

The programme is co-funded by the ESA and the European Commission.