X
Advertise with us
Mrinmoyee 20 December 2015 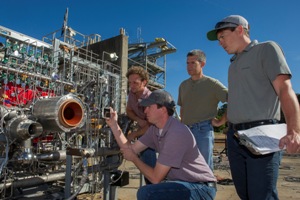 For the last three years, the team at Marshall have been working with several groups to build 3D printed parts, including turbopumps and injectors, and test them separately.

However, they have recently tested the parts together by connecting the parts in the same way as in the case of a real engine, although the parts were not packed up together to look like a typical engine.

Seven tests were conducted during the recent test and the longest was ten seconds.

The 3D printed demonstrator engine had to undergo all the extreme environments, experienced inside a flight rocket engine during the test.

"By testing the turbopumps, injectors and valves together, we’ve shown that it would be possible to build a 3D printed engine for multiple purposes such as landers, in-space propulsion or rocket engine upper stages."

3D printing or additive manufacturing has the potential to boost the scope of space vehicle designs and manufacturing as well as reduce the cost of exploration mission, to be launched from earth to other destinations.

The NASA team plans to conduct an engine test with liquid oxygen and methane in future missions, such as a mission to Mars, since production of both methane and oxygen might be possible on the Red Planet.

"These NASA tests drive down the costs and risks associated with using additive manufacturing, which is a relatively new process for making aerospace quality parts."

The team further plans to include other key components to the demonstrator engine, such as a cooled combustion chamber and nozzle as well as a turbo pump for liquid oxygen in their future tests.

Robertson added: "These NASA tests drive down the costs and risks associated with using additive manufacturing, which is a relatively new process for making aerospace quality parts.

"Vendors who had never worked with NASA learned how to make parts robust enough for rocket engines.

"What we’ve learned through this project can now be shared with American companies and our partners."

Image: Engineers prepare a 3-D printed breadboard engine made up of 75 percent of the parts needed to build a rocket engine for a test at NASA’s Marshall Space Flight Center in Huntsville, Alabama. Photo: courtesy of NASA/MSFC/Emmett Given