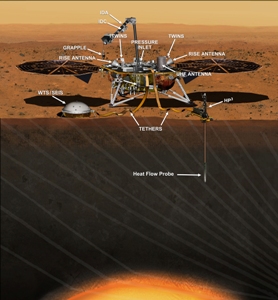 NASA has called off the scheduled March launch of the Interior Exploration using Seismic Investigations Geodesy and Heat Transport (InSight) mission due to a leak in a major scientific instrument of the spacecraft.

The InSight spacecraft was planned to be launched to study the evolution of rocky planets, including Earth.

NASA has taken the decision to cancel the mission after several failed attempts to repair the leak appeared in the French space agency CNES-built seismometer, Seismic Experiment for Interior Structure (SEIS).

The SEIS has to be vacuum sealed around its three key sensors to survive the harsh Martian environment.

The sensor has been developed to measure ground movement as little as the diameter of an atom.

Earlier this year, NASA team have fixed a leak in the seismometer. However, while recently conducting a test in acute cold temperature of -45 degrees Celsius, the device again experienced failure.

Following the cancellation of the mission, the next launch opportunity of InSight will come in 2018.

The best condition for launching missions from Earth to Mars is available for just a few weeks every 26 months.

NASA Washington science mission directorate associate administrator John Grunsfeld said: "Learning about the interior structure of Mars has been a high priority objective for planetary scientists since the Viking era.

"We push the boundaries of space technology with our missions to enable science, but space exploration is unforgiving, and the bottom line is that we’re not ready to launch in the 2016 window.

"A decision on a path forward will be made in the coming months, but one thing is clear: NASA remains fully committed to the scientific discovery and exploration of Mars."

The spacecraft was built by Lockheed Martin and was recently delivered to Vandenberg Air Force Base in California. With the suspension of the mission, the spacecraft will be returned to Lockheed’s facility in Denver.

The Heat Flow and Physical Properties Package (HP3), another major instrument of InSight has been supplied by German Aerospace Center (DLR).

NASA planetary sciences division director Jim Green was quoted by Reuter, saying that the cost of the InSight mission, including launch and data analysis, has shot up from an initial $425m to $675m.

"InSight’s investigation of the Red Planet’s interior is designed to increase understanding of how all rocky planets, including Earth, formed and evolved."

"Mars retains evidence about the rocky planets’ early development that has been erased on Earth by internal churning Mars lacks.

"Gaining information about the core, mantle and crust of Mars is a high priority for planetary science, and InSight was built to accomplish this."

The InSight mission is considered to be significant before NASA’s planned Mars exploration programme, which involves sending humans to the Red Planet.

However, the space agency stated that the cancellation of InSight mission would not affect other Mars missions.

Image: This artist’s concept from August 2015 depicts NASA’s InSight Mars lander fully deployed for studying the deep interior of Mars. The mission will launch during the period March 4 to March 30, 2016, and land on Mars Sept. 28, 2016. Photo: courtesy of NASA/JPL-Caltech