X
Advertise with us
Rohit 8 January 2015 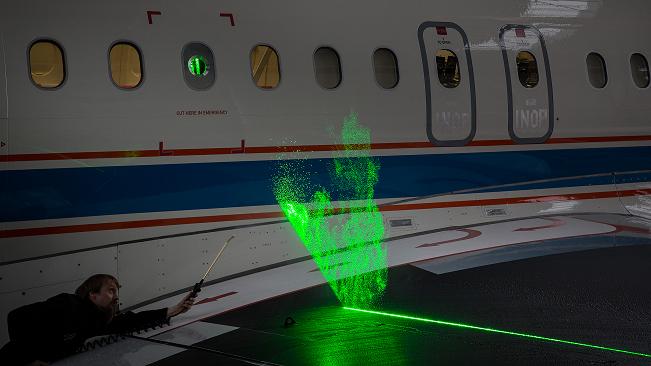 German Aerospace Center (DLR) researchers and Airbus have completed an in-flight laser measurement of aerodynamics to visualise the airflow over the wing of a passenger aircraft.

The in-flight test data will be used to optimise future wings and flap systems suited to slower landing approaches of the aircraft.

Aircraft that approach for landing at a lower speed are quieter and can operate on shorter runways, researchers said.

For the three-and-a-half hour flight, the team used a DLR A320 advanced technology research aircraft (ATRA), which set off from the research airport in Braunschweig, Germany.

To identify the smallest movements of the air, researchers created a method that captures the movement of water droplets streaming over the wing.

"This enabled us to use laser illumination to acquire thousands of images of the reflections from water droplets while in the air."

Researchers have installed an optically diverged laser behind a special window and two high-speed cameras to left and right, behind other cabin windows, pointing onto the wings of the ATRA.

DLR Institute of Aerodynamics and Flow Technology staff Christina Politz said: "This enabled us to use laser illumination to acquire thousands of images of the reflections from water droplets while in the air."

The team is currently working to create 3D animations of the airflow around the wing.

DLR Institute of Aerodynamics and Flow Technology department head Ralf Rudnik said: "We want to acquire an understanding, in hitherto unachieved precision, of how the airflow behaves around the wings and flaps, and especially around the engine nacelles, during low-speed flight.

"Only if we come to a better understanding of the aerodynamic limits during low-speed flight will we have the opportunity to shift these limits to our benefit in the future."

Image: The in-flight test data will be used to optimise future wings and flap systems. Photo: courtesy of DLR.