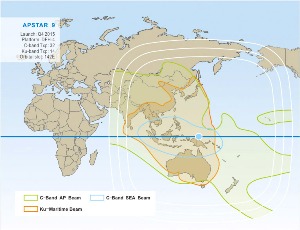 China has launched a new communication satellite APSTAR-9 into orbit through the Long March-3B carrier rocket from the Xichang Satellite Launch Center.

The APSTAR-9 communications platform is owned and operated by APT Satellite in Hong Kong, which will have mission life of 15 years and replace the ageing Apstar-9A satellite that was in orbit since 1998.

According to China’s Xinhua news agency, a Long March 3B rocket, boosted by four liquid-fuelled strap-on engines put the satellite in orbit 26 minutes after its launch.

With the latest launch, APT’s APSTAR fleet will be able to cover three quarters of the global population living in Asia, Europe, Africa and Australia.

It will provide TV transmission and transponder, data and satellite communication services.

In order to expand satellite transponder capacities and service capability of the APSTAR Group in the Asia-Pacific region, an in-orbit satellite called APSTAR-9 was commissioned in 2013.

"The successful launch of APSTAR-9 satellite marks a major milestone in the development of the group."

C-band transponders of APSTAR-9 satellite is dedicated to provide broad coverage for Asia and Pacific island countries. Ku-band transponders are built with sophisticated Ku-band coverage over a broad region stretching from East India Ocean to the West Pacific Ocean region.

APT Satellite president Cheng Guangren said: "The successful launch of APSTAR-9 satellite marks a major milestone in the development of the group.

"It has 46 transponders in total, which will enable us to expand our satellite service and customer base.

"After the completion of the in-orbit test, all the existing customers on APSTAR-9A satellite will move to APSTAR-9 satellite."

APSTAR-6C satellite is the second DFH-4 platform satellite the company ordered, which will carry 45 transponders in C, Ku, and Ka bands, with a designed service life of 15 years.

It will provide high power transponder services in the Asia-Pacific region for VSAT, video distribution, DTH and cellular backhaul applications.

Image: APSTAR-9 satellite is dedicated to providing broad coverage for the Asia and Pacific island countries and over a broad region stretching from East India Ocean to the West Pacific Ocean region. Photo: courtesy of APT Satellite / APSTAR.