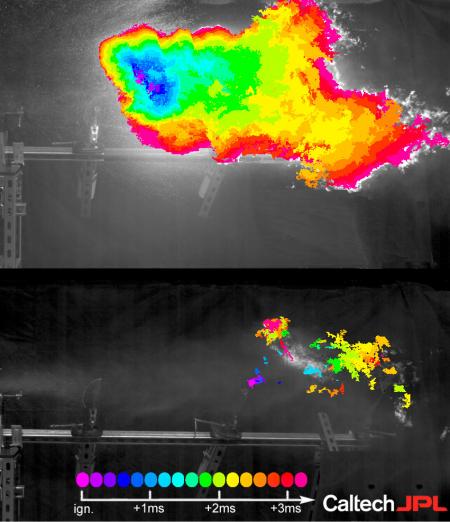 Researchers at California Institute of Technology (Caltech) and Jet Propulsion Laboratory (JPL) have discovered a polymeric fuel additive that can reduce the severity of explosions of an aircraft, making it useful during accidents and terrorist attacks.

JPL is managed by Caltech for Nasa.

Preliminary results of the research have shown that the additive can provide this advantage without adversely affecting fuel performance of the air carriers.

Aeroplanes carry tens of thousands of litres of fuel, and the laboratory of chemical engineering professor Julia Kornfield produced the additive, which is hoped to make them safer during incidents.

The chemicals is a type of polymer consisting of many long, repeating sub-units that are limited at each end by units that act like Velcro.

This process of individual polymers that automatically link into ultra-long chains is known as ‘megasupramolecules’.

According to Kornfield, megasupramolecules have combination of properties that allow them to control fuel misting, the process that sprays the fuel for ignition, which ultimately improves the fuel’s flow through pipelines and reduces dirt formation.

The 2 October issue of the journal Science published an article titled, ‘Megasupramolecules for safer, cleaner fuel by end association of long telechelic polymers’, on the discovery of the new fuel additive.

"Megasupramolecules have combination of properties that allow them to control fuel misting…which ultimately improves the fuel’s flow."

Research scientist and a co-author of the paper Ming-Hsin ‘Jeremy’ Wei said: "The idea of megasupramolecules grew out of ultra-long polymers.

"In the late 1970s and early 1980s, polymer scientists were very enthusiastic about adding ultra-long polymers to fuel in order to make post-impact explosions of aircrafts less intense.

"The concept was tested in a full-scale crash test of an airplane in 1984. The plane was briefly engulfed in a fireball, generating negative headlines and causing ultra-long polymers to quickly fall out of favour."

Wei plans to develop a reactor to produce the polymer in vast amounts over the next year, so that jet fuel, diesel, or oil can use the additive.

Image: Comparison of flame progress after ignition in a post-impact mist of Jet-A fuel treated with prior ultra-long polymers (upper) and the Caltech polymer (lower) after the samples have passed through a fuel pump 50 times. Photo: courtsey of Caltech/JPL.