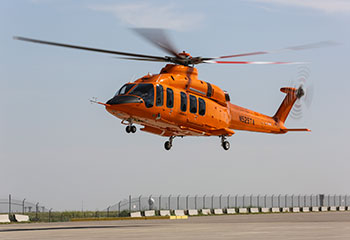 Bell Helicopter has completed the first flight of its super-medium Bell 525 Relentless helicopter at its aircraft assembly centre in Amarillo, Texas, US.

World’s first fly-by-wire commercial helicopter, the Bell 525, is designed to perform a wide variety of missions in challenging environments with a decreased pilot workload.

Bell 525 adapts various technological advancements, as well as offering better payload, cabin, cargo volumes, and passenger comfort. It can perform CAT-A takeoffs and landings to and from a helipad at maximum gross weight.

"The Bell 525 was announced at Heli-Expo in 2012, and we are proud to have achieved this milestone."

Bell Helicopter commercial programmes executive vice-president Matt Hasik said: "The Bell 525 was announced at Heli-Expo in 2012, and we are proud to have achieved this milestone.

"We have diligently executed our schedule to design, develop, build and test the aircraft, and look forward to the next phase of flight testing as we work towards certification."

Based on inputs from a customer advisory panel, the Bell 525 is designed as an aircraft to serve operational safety, payload and range, cabin comfort and configuration, and reliability requirements, the company said.

Bell 525 has logged orders for more than 60 helicopters to date, under letters of intent.