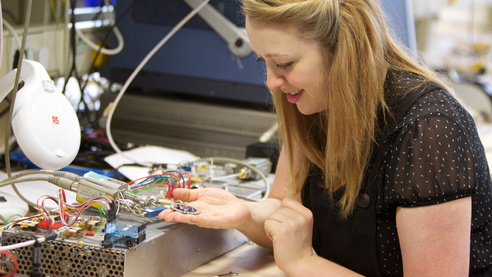 "The sensors are so small that we are exploring the possibility of retrofitting them to existing aircraft and even spraying them on like paint."

BAE Systems said: "The sensors are so small that we are exploring the possibility of retrofitting them to existing aircraft and even spraying them on like paint."

Led by senior research scientist Lydia Hyde, the R&D is part of a range of next-generation technologies being explored by BAE for air platforms.

Hyde said that the idea for the concept came while using a tumble dryer, which uses a sensor to prevent it from overheating.

"Observing how a simple sensor can be used to stop a domestic appliance overheating, got me thinking about how this could be applied to my work and how we could replace bulky, expensive sensors with cheap, miniature, multi-functional ones," Hyde said.

"This in turn led to the idea that aircraft, or indeed cars and ships, could be covered by thousands of these sensors creating a ‘smart skin’ that can sense the world around them and monitor their condition by detecting stress, heat or damage.

"The idea is to make platforms ‘feel’ using a skin of sensors in the same way humans or animals do."