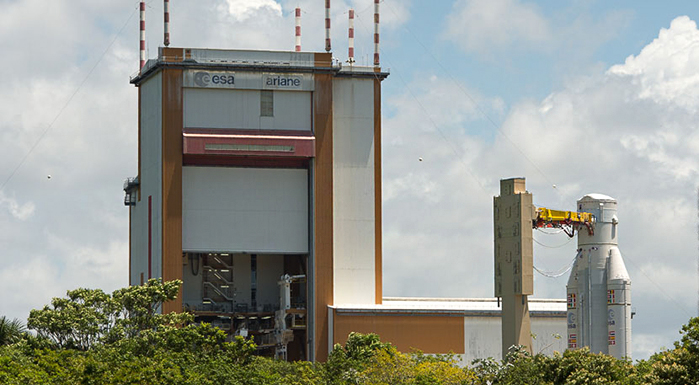 Arianespace’s Ariane 5 dual-passenger heavy-lift launch vehicle is being readied for its next mission on 20 August, when it will launch EUTELSAT 8 West B and Intelsat 34 satellites.

Designated as Flight VA225, the mission will be the fourth for Arianespace’s launcher this year.

The vehicle has been transferred to the final assembly building at the French Guiana spaceport. It is built by prime contractor Airbus Safran Launchers.

Planned to be launched to 8°W orbital position, the EUTELSAT 8 West B will join the existing Eutelsat and the Egyptian-made Nilesat in 7°W position.

The satellite will introduce a C-band mission to 8°W orbital slot, with ten transponders connecting footprints spread over Africa and South America.

Built by Space Systems Loral, the Intelsat 34 is based on the SSL 1300 platform, which includes the SPT-100 electric propulsion system.

Intelsat 34 satellite is designed to serve media distribution requirements in Latin America, as well as support advanced broadband service to maritime and aeronautical providers that cater to the North Atlantic.

The planned launch comes after 15 July lift-off of Ariane 5 carrying Star One C4 and MSG-4 satellites.

The heavy-lift vehicle also launched DirecTV-15 and Sky Mexico-1 satellites, and THOR 7 and SICRAL 2 satellites from French Guiana this year.