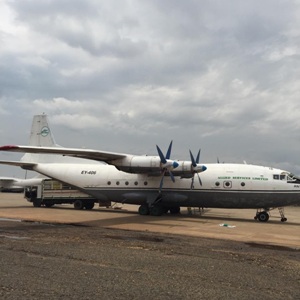 A Russian-built Antonov cargo plane with 20 passengers onboard crashed after take off, 800m from South Sudan’s Juba international airport.

The An-12 plane crashed in a farming area on the banks of the White Nile river and left a trail of scattered debris.

While the number of people killed in the accident has not been confirmed yet, various media reports have quoted approximately 35 casualties, including victims from on the ground.

Two people, including a one-year-old infant, survived the crash but one of them died later, leaving the baby as the lone survivor of the crash, the Red Cross said.

South Sudan presidential spokesperson Ateny Wek Ateny said all passengers onboard were from South Sudan, but the six-member crew had five Armenians and one Russian.

The plane was being operated by a local logistics firm Allied Services.

A Juba Air Cargo An-12 crashed in June 2008 on its way from Khartoum to Juba due to a thunderstorm, killing five people. The Sudanese plane came down a few days after an Airbus A321, operated by Russia’s Kogalymavia airline, crashed in Egypt’s Sinai Peninsula region.

All 224 people onboard, most of whom were returning from a holiday, were killed.

Authorities are still looking into the cause of the accident, but have not yet arrived at any conclusion.