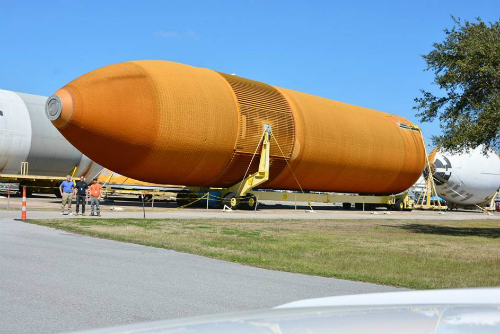 PPG helped the California Science Center Foundation prepare the final space shuttle external tank for a six-week ocean voyage by donating a military-grade paint matching the tank’s foam covering to enhance appearance and protect against elements during its journey by barge from NASA’s Michoud Assembly Facility in New Orleans to Los Angeles.

Upon arrival in California, ET-94, the only existing flight-qualified external tank, will undergo cosmetic restoration for display at the California Science Center along with the space shuttle Endeavour.

DESOTHANE® HS/CA 8211 series military and defense topcoat manufactured at PPG’s Mojave, California, plant was tinted to match the burnt-orange foam by PPG aerospace coatings color experts. Loose foam was removed from ET-94 at Michoud, and the PPG topcoat was applied by roller and brush to cover gaps for a consistent appearance.

According to Duane Utter, PPG global segment manager for space and defense coatings, PPG was asked to supply the paint by Dennis R. Jenkins, project director overseeing the science center’s new Samuel Oschin Air and Space Center who was a contract engineer for the shuttle program and knew PPG was the original primer supplier.

"PPG was a proud partner in the space shuttle program as the supplier of the only primer qualified for the external tanks," Utter said. "This primer passed cryogenic and corrosion testing and met requirements for foam adhesion. After accepting the opportunity to supply the topcoat for the historic ET-94 journey, we matched the color of the foam, and our sample was approved by the science center. We recommended Desothane HS/CA 8211 series topcoat because of its matte appearance and durability."

Jenkins said it was important for ET-94 to look as nice as possible. "We wanted ET-94 to be protected from water on its voyage and to look good during its long journey to the Samuel Oschin Air and Space Center. The California Science Center is very grateful for the support provided by PPG, one of the original external tank suppliers, in helping us with our work that will enable people to see an important part of the shuttle program."

The 65,000lb, 154ft-long ET-94 was loaded onto a barge in New Orleans and transported through the Panama Canal for delivery to Marina del Rey, California, riding its last leg through the streets of Los Angeles to the California Science Center.