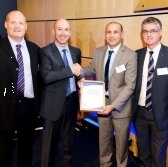 Wheelabrator Impact Finishers celebrated being the first shot peening subcontract supplier in the UK to win the supply chains for the 21st century (SC21) bronze award at the SC21 Task Force Conference at the Williams F1 conference centre in Oxfordshire.

SC21 is an improvement programme designed to increase the performance of suppliers and ultimately their supply chains within the UK aerospace, security, space and defence industries.

Wheelabrator Impact is delighted to have been accepted for the SC21 bronze award, based on its quality and delivery performance which is measured and confirmed by its customers as well as internally.

SC21 recognised the hardwork of the Wheelabrator Impact Finishers team to achieve this award which ultimately means additional benefits for its customers in years to come.

Tony Grammauro, who accepted the award, said: "We are delighted to be the first shot peening subcontract supplier to receive this award. The team has worked hard to make significant improvements to our processes which we are able to pass on to our customers."