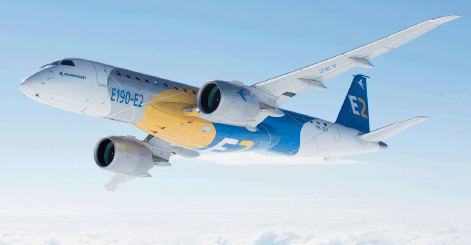 PCB Piezotronics, Inc., the pioneer of ICP® technology, supplied Embraer, a growing Brazilian aircraft manufacturer, accelerometers and pressure sensors for use in their flight test program for the new E190-E2 series. The first flight took off from Embraer’s facility in São José dos Campos on May 23rd. The flight, which lasted for over three hours, was originally scheduled for the second half of this year.

The flight occurred just three months after the E190-E2 made its public debut at a rollout ceremony at the factory in late February. The inaugural flight marks the beginning of the certification campaign for the aircraft, the first of three new second-generation E-Jet models. The E190-E2 is scheduled to enter commercial service in 2018.

PCB’s accelerometers and pressure sensors were used by Embraer during the first flight to evaluate aircraft handling and performance characteristics, with the crew analyzing a large number of flight parameters, including speed, altitude and landing gear retraction. This was made possible by extensive use of digital modeling simulations and ground and static tests, which allowed the E2 to reach high level of maturity during program development. During this process, it was crucial for Embraer to use test sensors that make accurate measurements without failure allowing the completion of testing ahead of schedule.

PCB® application engineering team was available to Embraer throughout this program, and added a substantial value by ensuring that sensors used were suited for Embraer’s specific needs. This afforded Embraer the opportunity to demonstrate that the E190-E2 project is very mature, robust, and exceeds all performance targets" said Bob Metz, Director of Sales and Marketing for the Aerospace and Defense Division of PCB.

The E190-E2 is the first of four prototypes that will be used in the certification program. Two additional aircraft will be assigned to the E195-E2 certification process that will lead to entry into service in 2019. The new model has the same number of seats as the current-generation E190 but has 400 nautical miles greater range, enabling flights up to 2,800 nautical miles.