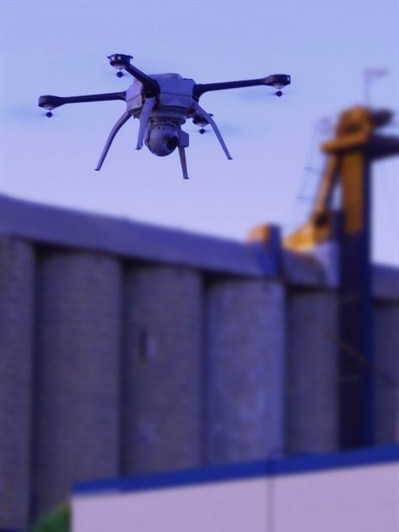 Developed by Tremco and Canada-based commercial UAV and data solutions company Industrial SkyWorks (ISW), SkyBEAM is also approved to operate during the day.

The fitted thermographic camera demonstrates temperature variations around a building that indicate problems, including poor or missing window sealing or wet rooftop insulation, which can lead to major capital expenses, increased operating costs, occupant discomfort and other issues.

Tremco noted that infrared scanning works effectively at night, as the sun is not affecting the temperature the building.

The UAV’s high-resolution video camera is claimed to have the ability to read the fine print on a warranty from a distance of 50ft.

"We programme the UAV to fly to a precise height, do the mapping and return. We can now map buildings without the time and expense of using tools such as scaffolding.

"SkyBEAM enables us to find problems for our customers that would have been virtually impossible to detect before, and without risking people’s safety."

Using SkyBEAM, technicians can safely mark problem areas during the day for removal and replacement, or further analysis if required.

A two-person crew, including a licensed pilot, operates the UAV safely on the ground.

SkyBEAM can fly horizontally across roofs or vertically up to 400ft. It can reach speeds of 25mph, as well as maintain its flight path in winds of up to 25mph and gusts reaching 50mph.

For the last 18 months, ISW has been operating SkyBEAM drones in Canada.