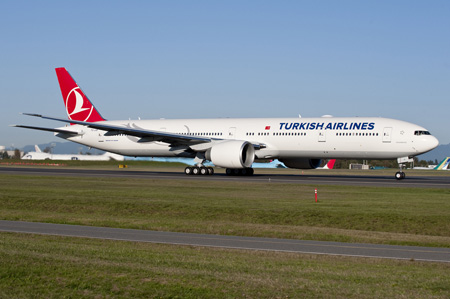 Turkish Airlines has confirmed plans to convert its optional order to purchase five Boeing B777-300ER aircraft into a firm order.

In April, Turkish Airlines stated that it planned to acquire a total 95 aircraft from Boeing by 2021, including 25 options.

Turkish Airlines finalised the firm order in December 2012, making it the airline’s largest order by value.

At that time, Boeing Commercial Airplanes European sales vice-president Todd Nelp said that the order from Turkish Airlines was testament to the key role the 777 has played in the carrier’s long-haul route expansion.

"The exceptional performance of the 777-300ER, with its excellent fuel economics, reliability and passenger comfort, has been a cornerstone for Turkish Airlines’ continued growth," Nelp said.

"The Turkish flag carrier currently operates 12 777-300ERs in its fleet, with the first model delivered by Boeing in October 2010."

The Turkish flag carrier currently operates 12 777-300ERs in its fleet, with the first model delivered by Boeing in October 2010.

It plans to operate the new jetliners on new routes across the world as part of its expansion plan.

Powered by GE90-115B turbofan, the aircraft has a maximum range of 7,930nm and can accommodate 386 passengers in a three-class layout.

Turkish Airlines, which operates flights to over 200 destinations in 90 countries across the globe, has around 100 Boeing aeroplanes in its fleet.

Image: The optional order is part of Turkish Airlines’s order for 15 twin-engine 777-300ER announced in October 2012. Photo: courtesy of Boeing.