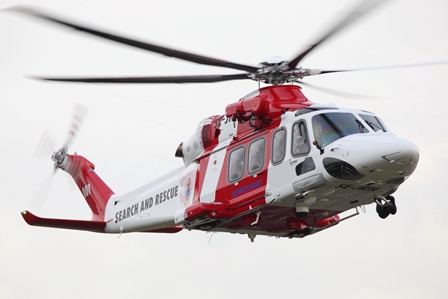 Swedish Maritime Administration has received an AW139 intermediate twin engine helicopter from AgustaWestland, a Finmeccanica company, and is the first of seven AW139s ordered.

The rotorcraft was delivered to the Swedish agency at an official ceremony held at the company’s facility in Vergiate, Italy on 10 September.

The Swedish Maritime Administration, which is responsible for maritime and aeronautical search-and-rescue (SAR) services in Sweden, will operate the AW139 helicopters from five bases across the country.

The agency is expected to receive the second helicopter shortly, with the third by the end of this year and all deliveries are expected to be completed during 2014.

The Swedish Maritime Administration’s AW139s are equipped with a number of dedicated mission systems, including the full ice protection system (FIPS), allowing flights into known icing conditions and enabling all weather operations, while other types would be confined to the hangar.

"All deliveries are expected to be completed during 2014."

AgustaWestland CEO Daniele Romiti said: "By selecting one of the most advanced SAR-dedicated rotorcraft systems in our comprehensive product range, Sweden will also benefit from the AgustaWestland’s long standing, well established expertise in rescue operations."

According to AgustaWestland, the AW139 is widely used in the European SAR market, due to its long range and all-weather operational capabilities, as well as in Northern Europe for passenger transportation to offshore oil and gas installations.

To date, more than 200 customers from 60 countries have placed orders for 730 AW139 helicopters.

Image: The Swedish Maritime Administration will operate the AW139 helicopters from five bases across the country. Photo: courtesy of AgustaWestland NV.