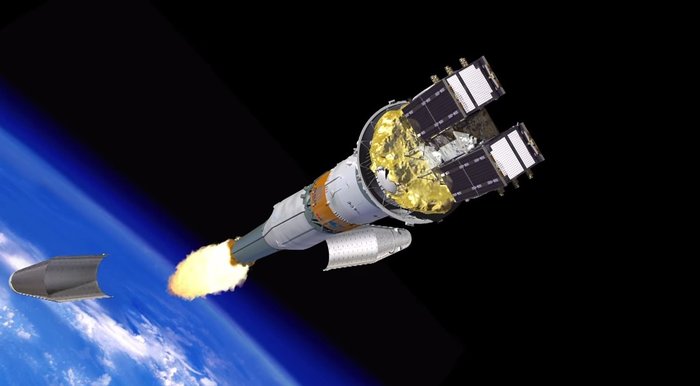 The seventh and eighth Galileo satellites have been lifted-off on-board Arianespace’s Soyuz rocket from spaceport in French Guiana.

Three hours and 48 minutes after lift-off, the Fregat upper stage released the satellites into their target orbit at close to 23,500km altitude.

The satellites will undergo testing before being commissioned for operational service.

The Galileo Control Centre in Oberpfaffenhofen, Germany and the Galileo in-orbit testing facility in Redu, Belgium will take over the control of the spacecraft after initial checks.

ESA director general Jean-Jacques Dordain said: "The deployment of the Galileo constellation is restarting with this successful launch.

"The tests in orbit of satellites 5 and 6 have demonstrated the quality and performance of the satellites, and the production of the following ones is well on track. Good news for Galileo."

"The deployment of the Galileo constellation is restarting with this successful launch."

The latest pair will complement the six satellites launched in October 2011, October 2012 and August 2014, and will be joined by four more satellites scheduled for launch later this year.

ESA Galileo and navigation-related activities director Didier Faivre said: "With six new satellites expected to be in orbit by year’s end, we are now approaching the cruise mode of production, testing and deployment of the satellite constellation."

The Galileo programme, co-funded by the ESA and the European Commission, is designed to provide an accurate global positioning system under European civilian control.

The European Commission intends to deliver initial services, including an encrypted public regulated service and a search-and-rescue function by 2016.

An encrypted commercial service from 24 operational satellites and six spares is expected to be implemented through Galileo’s full operational capability phase by 2020.

Image: Three hours and 48 minutes after lift-off, the Fregat upper stage released the Galileo satellites into their target orbits. Photo: courtesy of Arianespace.