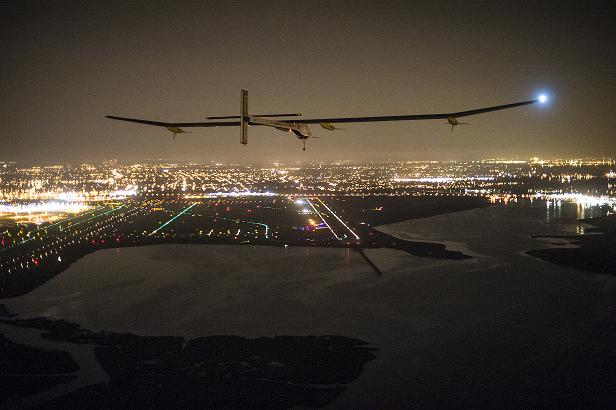 Solar Impulse C, the aircraft exclusively powered by solar energy, has successfully landed at John F Kennedy International Airport in New York, completing the final stage of the journey across the US.

The flight marks a new milestone for the first time an aircraft capable of flying day and night powered exclusively by solar energy has crossed the US from west to east coast.

The aircraft features four propellers driven by energy accumulated from 12,000 solar cells in its wings to charge batteries for night use.

Solar Impulse co-founder and CEO André Borschberg landed the aircraft at John F Kennedy airport on 6 July at 11.09pm EDT, around three hours earlier than scheduled due to a rip in the fabric on the lower side of the left wing.

The flight took 18 hours 23 minutes, with a departure from Washington Dulles at 4.46am EDT on Saturday.

Solar Impulse’s US flightstarted on 3 May in San Francisco, California, and involved a total of 105 hours 41 minutes and 3,511 miles, flown at an average speed of 28.8k.

André Borschberg said that this last leg was especially difficult due to the damage of the fabric on the left wing, which made the team to think up all the possible scenarios, including bailing out over the Atlantic.

"During this journey, we had to find solutions for a lot of unforeseen situations, which obliged us to develop new skills and strategies."

"This type of problem is inherent to every experimental endeavor," Borschberg said. "We extend our gratitude to all airport and government authorities whose precious support made this mission possible."

"During this journey, we had to find solutions for a lot of unforeseen situations, which obliged us to develop new skills and strategies," Piccard said.

"In doing so, we also pushed the boundaries of clean technologies and renewable energies to unprecedented levels."

The Solar Impulse Across America mission has been conducted in partnership with Solvay, Schindler, Bayer Material Science, Swiss Re Corporate Solutions, Sunpower and the Swiss Confederation.

Image: The arrival of Solar Impulse in New York marks the completion of its journey across America, which started on 3 May in San Francisco, California. Photo: courtesy of Solar Impulse.