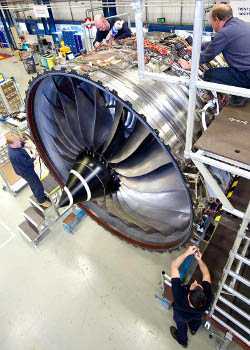 Rolls-Royce has been awarded type certification from the European Aviation Safety Agency (EASA) for its higher efficiency and thrust ‘package C’ variant of the Trent 1000 engine that will power the Boeing 787-9 Dreamliner aircraft.

Certification comes as the company prepares to power the first test flight of the Boeing 787-9.

An additional improvement to the engine, the Trent 1000-TEN (Thrust, Efficiency and New technology), will enter service in 2016.

"The improved engine will be certified to 78,000lb thrust."

The improved engine will be certified to 78,000lb thrust and will be capable of powering all variants of the Boeing 787, including the recently launched 787-10.

According to Rolls-Royce, the Trent 1000 is the quietest and most efficient engine option for the Boeing 787 Dreamliner.

The engine, which was the first to power the 787 into service in 2011, has delivered a dispatch reliability of greater than 99.9%, which is the highest for a wide-body aircraft engine, the company said.

Image: The Trent 1000 engine is capable of powering all variants of the Boeing 787. Photo: courtesy of Rolls-Royce plc.