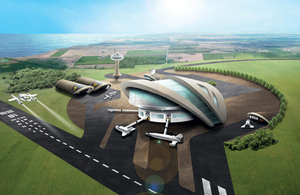 The UK Government has shortlisted five locations as the possible sites for the country’s first spaceport.

Shortlisted aerodromes for the project include Campbeltown, Glasgow Prestwick and Stornoway in Scotland, Newquay in England and Llanbedr in Wales.

Two airfields at RAF Lossiemouth and Kinloss Barracks in Scotland were ruled out due to operational defence reasons.

"The government intends to complete the spaceport and put it in operation for commercial space missions by 2018."

UK Aviation Minister Robert Goodwill said: "I want Britain to lead the way in commercial spaceflight. Establishing a spaceport will ensure we are at the forefront of this exciting new technology.

"Today’s consultation response marks another step forward in our work to support this emerging industry, which will create jobs and drive economic growth."

The government intends to complete the spaceport and put it in operation for commercial space missions by 2018.

UK Secretary of State for Business, Innovation and Skills Vince Cable said: "Launching satellites and operating commercial space flights from our shores was once only confined to the depths of science fiction, but with the results of this consultation we are one step closer to making this a very real ability in the near future."

In 2012, the CAA was tasked by the Department for Transport (DfT) and UK Space Agency to review the operational environment and regulations to allow space planes to operate.

DfT will develop a detailed technical specification of spaceport requirements before inviting proposals.