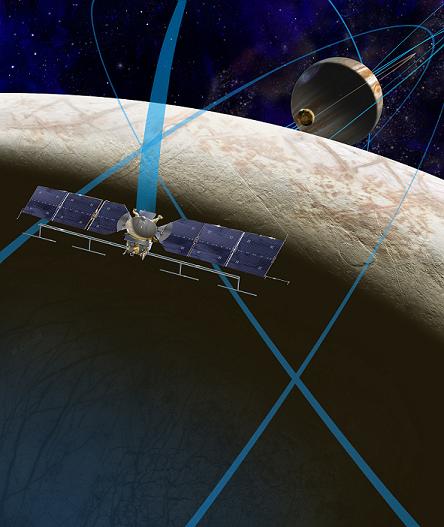 Nasa has progressed its mission to Jupiter’s moon Europa with the selection of scientific instruments to study whether the icy moon is suitable for sustaining life.

The nine instruments are part of proposals invited by Nasa last year for the mission, which is planned for launch in 2020.

The mission will also carry instruments to take images of surface areas of the moon, detect plumes and provide data dynamics of the moon’s rarefied atmosphere.

Nasa Europa programme scientist Curt Niebur said: "This is a giant step in our search for oases that could support life in our own celestial backyard.

"We’re confident that this versatile set of science instruments will produce exciting discoveries on a much-anticipated mission."

As part of the mission, a solar-powered spacecraft will orbit around Jupiter and perform 45 close flybys of Europa for three years, at altitudes of between 25km and 2,700km.

"Europa could be one of the best places for present-day life beyond Earth."

Europa is believed to host an ocean under a frozen crust of unidentified thickness with more than double the amount of water as on Earth.

More than a decade ago, the agency’s Galileo spacecraft yielded evidence of an ocean on the Jupiter moon, and recent Hubble observations indicated plumes of water shooting out from it.

At a similar size to the Earth’s moon, Europa could be one of the best places for present-day life beyond Earth, Nasa said.

In its fiscal year 2016 budget, Nasa sought $30m for the mission to Europa.

Earlier this month, the agency selected a proposal to develop an eel-like robotic rover for planetary missions, including moons such as Europa.

Image: An artist’s rendering of a future Nasa mission to Europa. Photo: courtesy of Nasa / JPL-Caltech.