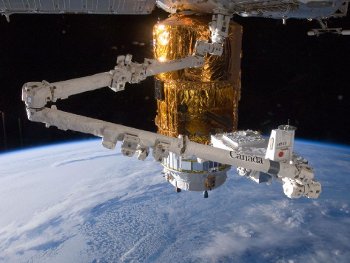 Canadarm2 was used detach the 32ft-long spacecraft from the ISS’s Harmony node and was later shifted to its released position.

The barrel-shaped cargo craft, carrying trash, is now coming back to Earth, where it will burn up somewhere over the Pacific Ocean today, according to NASA officials.

HTV-3, developed by the Japan Aerospace Exploration Agency, reached the orbiting laboratory on 27 July following its launch a week earlier.

It delivered around 8,000lbs of supplies including food, the YouTube SpaceLab winning experiments, five cubesats and a fish tank for the six-person crew at ISS.

The return of the cargo ship marks the end of the third HTV mission. The first flight was launched on 11 September 2009 and returned to Earth’s atmosphere on 2 November 2009. The second craft HTV2 was launched on 22 January 2011 and ended its mission in March that year.

"The barrel-shaped cargo craft is now coming back to Earth, where it will burn up somewhere over the Pacific Ocean today."

The departure of HTV-3 has created way for SpaceX’s Dragon spacecraft to arrive at the space station with fresh supplies in October 2012.

Japan’s HTV spaceships are part of an international fleet of unmanned spacecraft used for regular cargo deliveries to ISS.

Both SpaceX and Orbital Sciences have signed contracts with NASA to provide regular cargo delivery flights to ISS.

Image: Japan’s HTV-3, which was berthed to ISS, is scheduled to reach Earth’s atmosphere on 14 September. Photo: NASA.