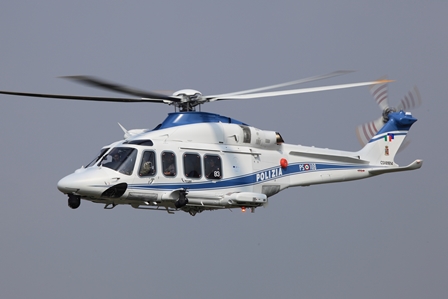 The new rotorcraft will be operated by the 1st Aviation Unit of the Italian Police and will be based at Pratica di Mare, close to Rome.

AgustaWestland stated that the additional aircraft would be delivered to the Italian Police in the coming months.

Italian Police signed a contract for a total of eight AW139 helicopters in July 2012.

The AW139 was selected following an extensive evaluation process of competing bids, which identified AW139 to be the best value solution to comply with the country’s mission and safety requirements.

The acquisition of new helicopters, which is partially being financed by the European Union Frontex programme, will support fleet modernisation plans of the Italian Police and benefit the communities they serve across national borders.

"AgustaWestland stated that the additional aircraft would be delivered to the Italian Police in the coming months."

This contract takes the total number of AW139s chosen by all Italian Government operators to 31, for wide range of services, including law enforcement and homeland security, patrol, special operations, search-and-rescue, government/VVIP transport, anddisaster relief, as well as command and control.

According to AgustaWestland, the AW139 is the only new-generation aircraft in its weight category in-service today.

The AW139 helicopters have logged more than 720 orders to date from 200 customers from some 60 countries worldwide.

Image: The new AW139 helicopters will support the fleet modernisation plans of the Italian Police and will benefit the communities they serve across national borders. Photo: courtesy of AgustaWestland, a Finmeccanica company.