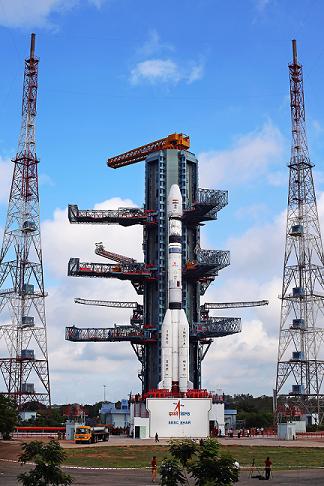 The launch will be carried out from Satish Dhawan Space Centre at Sriharikota in the Indian state of Andhra Pradesh.

According to Isro, the 49.1m GSLV-D6 will have a lift-off mass of 416t, and its metallic payload fairing has a diameter of 3.4m.

The vehicle is configured with the three stages, including the cryogenic upper-stage (CUS) similar to the one launched during the GSLV-D5 mission last year.

With a mass of 2,117kg, the GSAT-6 is designed to provide S-band communication services in the country. It will be stationed at 83°E longitude.

"The GSAT 6 will accelerate growth in the field of communication sector in the country.."

ISRO chairman Kiran Kumar earlier said: "The satellite will give you a capability with very small hand-held device to communicate, so like a small mobile you can communicate directly through the satellite to any other part, because the antenna size is very large, so it has got a signal grasping power much larger."

Thiruvananthapuram-based Vikram Sarabhai Space Centre director Sivan said that the GSAT 6 will accelerate growth in the field of communication sector in the country.

Meanwhile, Isro is planning to conduct test flight of its first-ever developed re-usable satellite launch vehicle in the fourth quarter of this year.

Kumar was quoted by The Times of India as saying that the agency has secured approval for three major missions, including the Chandrayaan 2, Aditya and AstroSAT mission.

AstroSAT mission is planned for launch in September.

Image: The GSLV-D6 launchpad that GSAT-6 will launch from. Photo: courtesy of ISRO.