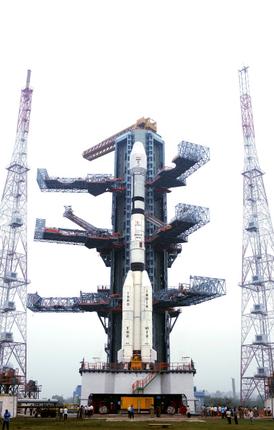 The Indian Space Research Organisation (ISRO) has called off the launch of GSAT-14 communications satellite aboard the geosynchronous satellite launch vehicle-D5 (GSLV-D5) after a fuel leak was detected on the rocket on Monday prior to its scheduled lift-off.

The fuel leak was observed in the UH25 fuel system of the second-stage engine during the pre-launch pressurisation phase on the vehicle, two hours before the takeoff.

The propellants were then drained from the cryogenic stage, liquid second stage and the four liquid strap-on motors of the vehicle, and the GSLV was moved to the vehicle assembly building to identify the reason behind the leak and undertake further actions.

ISRO stated that the revised launch date will be announced following a detailed assessment.

Powered by an cryogenic engine, the GSLV-D5 carrying the 1,982kg (4369.5lbs) satellite was scheduled for launch at 16:50 Indian Standard Time (11:20GMT) from the Sriharikota launch pad in the southern state of Andhra Pradesh.

The GSLV was expected to place the GSAT-14 satellite into its designated geosynchronous transfer orbit above Earth after a 17-minute flight.

GSAT-14, which is the 23rd geostationary communication satellite built by ISRO, was designed to provide satellite-based communication services to the country including tele-education and tele-medicine.

The efforts to launch the geostationary satellite aboard the cryogenic upper-stage GSLV-D5 comes after two unsuccessful attempts in 2010.

The GSLV-D5 was the eighth flight of the 415t GSLV, the fourth developmental flight, and the second time in the past three years that the cryogenic upper stage was flight-tested.

Image: The GSLV-D5 launch was called off due to fuel leak in the UH25 fuel system of the second-stage engine. Photo: courtesy of ISRO.