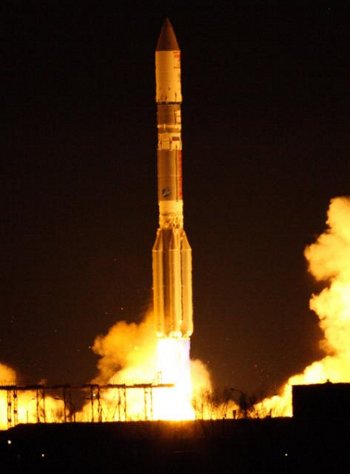 Communication satellite EchoStar XVI has been launched from the Baikonur Cosmodrome in Kazakhstan aboard the International Launch Services (ILS) Proton vehicle.

To place the orbital unit comprising Breeze M upper stage and the satellite into a sub-orbital path, the launcher, which consists of three stages, used a regular ascent profile.

"The satellite has been designed to offer direct-to-home services for 15 years and is leased to satellite broadcaster DISH in the US."

From then on, Breeze M used a usual five-burn mission for planned manoeuvres in order to move the unit to a circular parking orbit and later to an intermediate orbit.

Positioned at 61.5° W longitude, the satellite has been designed to offer direct-to-home (DTH) services for 15 years and is leased to satellite broadcaster DISH in the US.

ILS president Phil Slack said that with the successful launch of EchoStar XVI, ILS Proton had launched five of the satellites in the EchoStar fleet.

This is also the 382nd launch for Proton since its first flight in 1965, and the 76th launch executed.

It is ILS’s second mission since the Proton rocket returned after the failure of Russian Federal Telkom-3/Express MD-2 mission on 7 August.