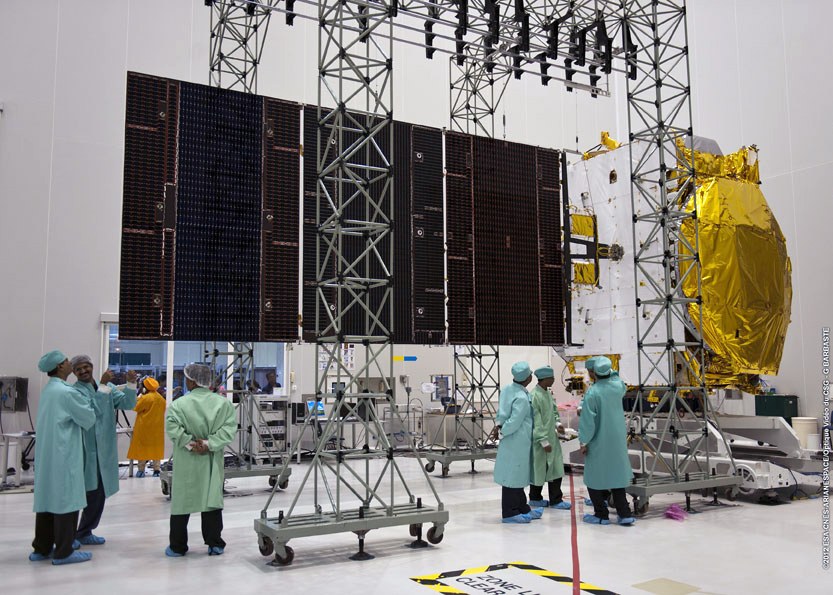 A GSAT-10 telecommunications satellite has successfully completed a solar panel deployment test at the spaceport in French Guiana as part of its pre-flight preparations, before its launch aboard Arianespace’s Ariane 5 launch vehicle in September.

Performed at the S5C high bay area of the spaceport’s S5 payload preparation centre, the test involved extension of the satellite’s multi-segment solar panels, which authenticates the operation of panels before being deployed in its final liftoff configuration.

Developed by the Indian Space Research Organisation (ISRO) to become part of the Indian National Satellite (INSAT) system of geostationary spacecraft, the GSAT-10 satellite is expected to meet the requirements for Ku and C-band transponder capacity.

“The test involved extension of the satellite’s multi-segment solar panels, which authenticates the operation of panels before being deployed in its final liftoff configuration.”

The satellite is equipped with 12 Ku-band, 12 C-band and 12 extended C-band transponders and deploys ISRO’s I-3K satellite bus, which offers a power capability of 6kW and an anticipated liftoff mass of some 3,400kg.

GSAT-10 is also equipped with the GPS and GEO augmented navigation (GAGAN) payload, which will allow the Indian Government to implement a satellite-based regional capability for offering aircraft navigation assistance over the country’s airspace and in adjoining regions.

In May 2011, the initial GAGAN payload was equipped on a GSAT-8 spacecraft launched aboard the Ariane 5.

Claimed to be the fifth mission of Arianespace’s from French Guiana in 2012, the Ariane 5 launcher, equipped with GSAT-10 and the Astra 2F satellite, will be launched on 21 September from the spaceport’s ELA-3 launch complex.