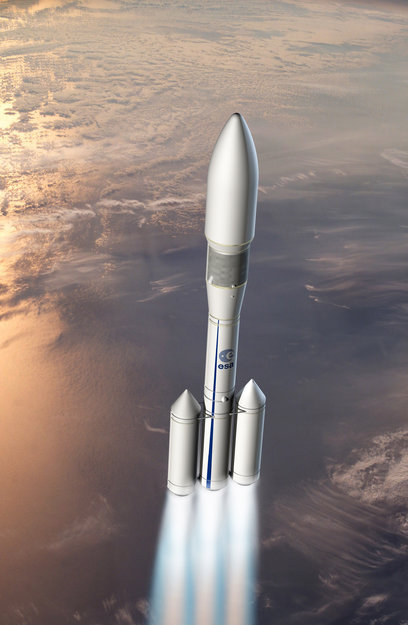 The European Space Agency (ESA) has selected the baseline configuration for the next-generation launch vehicle, Ariane 6, following approval by the agency’s ministerial council in November 2012.

The objective of Ariane 6 is to ensure a guaranteed autonomous access to space for Europe, while lowering costs and reducing required support.

Powered by two solid-fuelled lower stages, the Ariane 6 will feature the liquid-fuelled upper-stage, which is currently under development as an upgrade for the existing Ariane 5 vehicle.

This concept has been selected following trade-off studies for six months, conducted by a ‘plateau projet’ integrating industrial teams comprising Astrium, Avio, Herakles and the participation of Safran, MT Aerospace and others, under ESA contract.

The new rocket will have a lifting capacity of between 3t and 6.5t in equivalent to geostationary transfer orbit (GTO) occupied by telecommunication satellites. However, it will launch one spacecraft at a time compared with two routinely orbited by the Ariane 5.

The general configuration retained was ‘PPH’, which indicates the sequence of stages using both solid and cryogenic propulsion.

"The new rocket will have a lifting capacity of between 3t and 6.5t in equivalent to geostationary transfer orbit occupied by telecommunication satellites."

The configuration was selected by consensus based on the criteria of operations costs, time to market and development costs.

Providing synergies with the Vega evolution perspectives, the ‘Multi P linear’ concept is based on a lower composite of four motors, each loaded with approximately 135t of solid propellant.

An in-line arrangement of three motors will serve as the first stage, while the fourth will be mounted above as the second stage.

The third stage will be a modified version of the Ariane 5 ME upper stage, equipped with the Vinci engine and specific propellant tanks.

The 5.4m diameter payload will be capable of accommodating the similar number of satellites as Ariane 5.

ESA will consult with industry to accumulate competing ideas on key packages of the new launch system.

Consolidation of the current Phase A will take place at the preliminary requirements review (PRR) in October 2013.