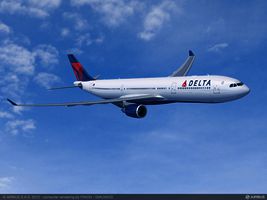 American carrier Delta Air Lines has placed an order for 40 Airbus aircraft worth nearly $5.6bn at list prices, marking a strong return to Airbus since Delta’s last order 20 year ago.

Scheduled for delivery between 2015 and 2017, the Airbus jets included in the order are ten international widebody A330-300 and 30 large domestic narrowbody A321 jets.

The US-based airline has chosen CFM56-5B engines from CFM International for its A321s and CF6-80E1 engines from GE Aviation to power its new A330 flights.

The latest order is part of Delta’s fleet renewal plan in order to enhance profitability, while carefully managing capacity.

"These A330s and A321s will provide tremendous flexibility for Delta to optimally manage our capacity over the next five years while further improving the flight experience for our customers and returns for our shareholders," Anderson said.

Delta will be the first carrier to operate the improved 242t A330-300, which provides up to 500nm of extra range, with a capacity to carry nearly 5mt additional payload compared with the previous 235t A330-300.

"These A330s and A321s will provide tremendous flexibility for Delta to optimally manage our capacity over the next five years while further improving the flight experience for our customers and returns for our shareholders."

Delta will use the aircraft capability to optimise its Pacific and Atlantic networks.

The company will receive 12 more flights in the same year, with the remaining 15 jets scheduled for 2017.

All of Delta’s A321s will have Sharklets, the lightweight composite wingtip devices that provide nearly 4% fuel-burn savings, offering the flexibility of either adding 100nm range or increased payload capability of nearly 1,000lb.

Delta’s A321s will have a capacity to accommodate 190 people in two classes.

Currently, Delta operates a large Airbus fleet, including 126 A320 family aircraft and 32 A330 flights.