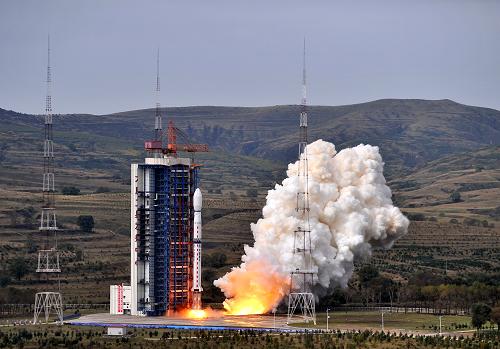 The FY-3C orbital satellite joins its predecessors FY-3A and FY-3B, which were launched in 2008 and 2010 respectively.

It will replace FY-3A to operate, after undergoing tests, in a morning orbit with the FY-2B, which is in an afternoon orbit, providing the temporal resolution of global observation data of up to six hours.

The FY-3C missions primarily include earth surface imaging and atmospheric sounding, and its observational data will be used in weather forecasting, as well as natural-disasters, ecological and environmental monitoring.

"The launch marks the beginning of a three-year mission."

The launch marks the beginning of a three-year mission to provide Chinese meteorological authorities with parameters such as cloud and surface radiation for generating weather forecasts, particularly in making medium numerical forecasting.

The satellites, which are a cooperative programme between CMA and CNSA (China National Space Administration), are aimed at gathering atmospheric data for intermediate and long-term weather forecasting and global climate research.

They are operated by the CMA and National Satellite Meteorological Center (NSMC), which are responsible for receiving and processing the data of Chinese and foreign meteorological satellites and distributing the accumulated information to users for application.

Image: The FY-3C orbital satellite joins its predecessors FY-3A and FY-3B, which were launched in 2008 and 2010 respectively. Photo: courtesy of China Meteorological Administration.