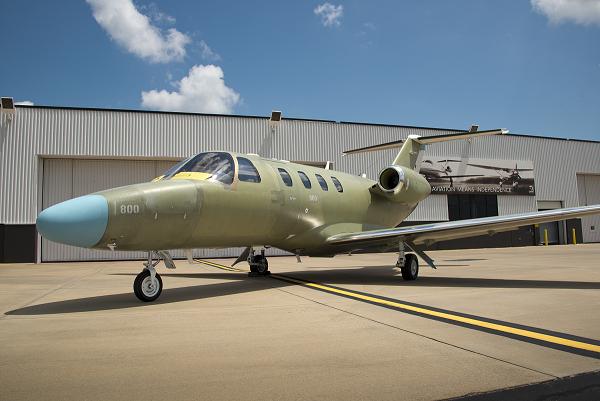 Cessna Aircraft, a Textron company, has rolled out the first production unit of its newest business jet, the Citation M2, at the company’s manufacturing facility in Independence, Kansas, US.

According to Cessna, the M2 is scheduled for delivery in the fourth quarter of this year.

"We have filled the assembly line, and now look forward to seeing M2s roll out of these doors for a long time to come."

"Seeing the M2 roll off the assembly production line was a special moment."

The facility, which currently employs nearly 500 people, was established in 1995 and has to date manufactured more than 10,000 aircraft.

Designed to accommodate up to six passengers on a 1,300-nautical-mile flight, the Citation M2 features are based on insights provided by pilots and customers.

The multi-function display with split-screen capability and touch screen interactivity provides pilots with precise performance information they need at the touch of a button.

Citation M2 can climb to a flight level of 41,000ft in 24 minutes and is single-pilot certified with a useful load of 3,809lbs.

Meanwhile, Cessna’s new civilian aircraft – the Citation X has completed its maiden flight, a development which marks a step closer to certification and delivery of the mid-size business jet.

Image: The Citation M2 is designed to accommodate up to six passengers on a 1,300-nautical-mile flight. Photo: courtesy of Cessna Aircraft Company.