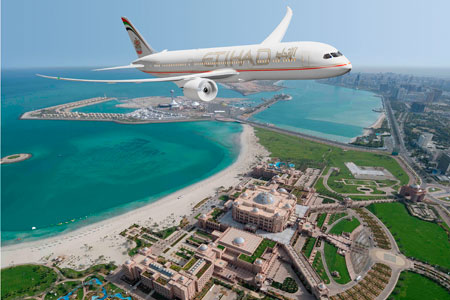 The contracts were signed in CAE’s first quarter and are valued at more than C$230m ($221.2m) based on list prices, bringing the total number of CAE’s FFS sales to 15 in the fiscal year 2014.

CAE Civil Simulation Products, Training and Services president Nick Leontidis said: "These contracts allow us to support both airlines with their growing need for well-trained pilots."

Under the contract with Etihad, the OEM aircraft-specific data, parts and equipment (DP&E) will be provided by CAE.

The full-flight simulators are all CAE 7000 Series models and include three Boeing 787 FFSs, two Airbus A320 FFSs, an Airbus A380 FFS and an Airbus A350 FFS.

The seven simulators and training devices will be delivered to the new Etihad training centre extension, which is under construction adjacent to its headquarters in Abu Dhabi.

"These contracts allow us to support both airlines with their growing need for well-trained pilots."

Etihad Airways currently operates a fleet of 77 Airbus and Boeing narrow and wide-body aircraft, with more than 90 aeroplanes on firm order, including 41 Boeing 787-9 Dreamliners and ten Airbus 380.

China Eastern Airlines has placed an order for a Boeing 737-800 FFS and a Boeing 777-300ER FFS, with both CAE 7000 Series models equipped with the latest CAE Tropos 6000 XR visual system.

The contract also includes two CAE Simfinity integrated procedures trainers and updates to the airline’s existing A330 and A320 FFSs.

Image: Under the contract, Etihad Airways will receive three Boeing 787 FFSs, two Airbus A320 FFSs, an Airbus A380 FFS and an Airbus A350 FFS. Photo: courtesy of Boeing.