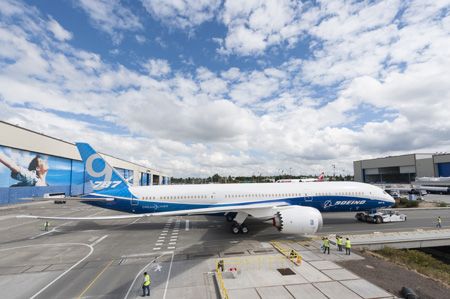 Boeing has rolled out the first 787-9 Dreamliner at the company’s manufacturing facility at Everett, Washington, US.

The 787-9, which is 20ft longer than the 787-8, will complement and extend the 787 family in both capacity and range, offering airlines the ability to grow routes opened with the 787-8.

The aircraft will fly an additional 300 nautical miles and accommodate 40 additional passengers while using 20% less fuel than similarly sized aeroplanes in the category.

The vertical stabiliser on the aircraft showcases the new Boeing Commercial Airplanes livery, a refreshed look for the Boeing aeroplanes that began with the 747-8 and evolved with the 737 Max.

The prominent number designator on the tail helps differentiate various models within the same product family.

Meanwhile, the company said that the 787-9 programme is progressing well, with the second and third aeroplanes in final assembly.

Boeing has selected its temporary surge line in Everett to build the first three 787-9s to allow for ‘smoother integration of the aircraft into the production system, while continuing to accelerate production across the 787 programme’.

The 787-9, which is the second member of the super-efficient 787 family, is scheduled to take its maiden flight in the second half of 2013 with the first aircraft slated to be delivered to launch customer Air New Zealand in early 2014.

Image: The 787-9 will complement and extend the 787 family in both capacity and range. Photo: Boeing.