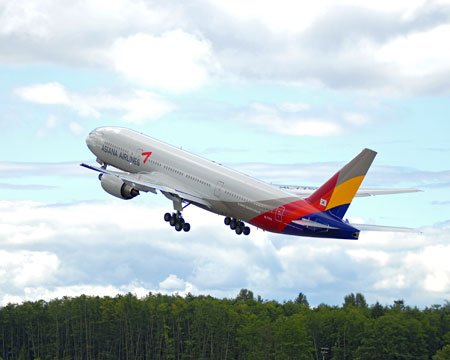 Asiana Airlines’ Boeing 777 that crash-landed at San Francisco International Airport on Saturday was flying significantly slower than the planned landing speed before touching the runway, according to the US National Transportation Safety Board (NTSB) investigators.

Investigators stated that the 777’s was travelling at 103k, when it should have been at the planned landing speed of 137k .

NTSB said it had yet to reach a conclusion on the exact reason for the crash but added that the voices recorded in the cockpit on the blackbox revealed that there were attempts to increase the speed and abort landing 1.5 seconds before the aircraft crashed.

The bodies of the two dead passengers, who have been identified to be Chinese teenage girls, were found outside of the plane and it is being investigated if one of them was run over by a rescue vehicle.

According to reports, the aircraft that took off from Seoul, South Korea, crashed after its tail hit the seawall on the runway.

The top of the aircraft was gutted and its landing gear and engine were strewn on the runway while passengers escaped through the emergency exits.

"According to reports, the aircraft crashed after its tail hit the seawall on the runway."

Asiana said that the pilot had 10,000 flying hours’ experience, but only 43 hours on Boeing 777s and he was landing the plane for the first time in San Francisco airport.

Asiana said it did not suspect a mechanical problem with the aircraft and issued a statement saying that it had set-up emergency response centres to probe the incident.

Boeing said that its technical team has been sent to the crash site, under direction of the NTSB. Saturday’s crash was the first involving a Boeing 777.

Asiana operates 23 Boeing passenger aircraft on 91 routes and is scheduled to receive the 13th 777 plane later this year.

Image: The crashed 777 is one among the 23 Boeing aircraft being operated by Asiana Airlines. Photo: courtesy of Boeing.