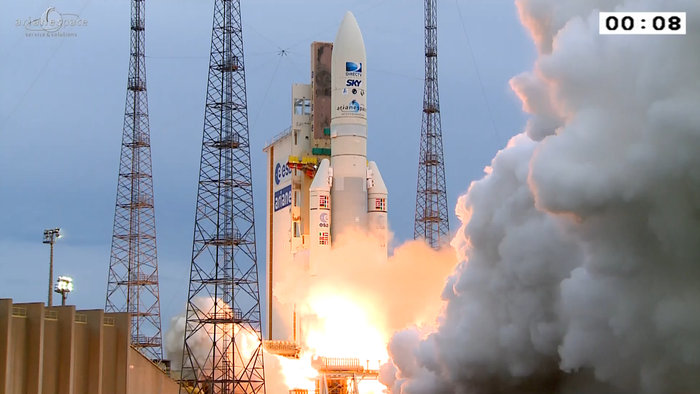 DirecTV-15 and Sky Mexico-1 satellites have successfully been lifted-off aboard an Arianespace’s Ariane 5 from spaceport in Kourou, French Guiana.

Designated flight VA223, the launch is the 79th Ariane 5 mission, and the second for the Ariane launcher.

After 28 minutes of flight, the upper passenger in payload arrangement, DirecTV-15, was released into its transfer orbit.

Following a series of burns by Ariane’s Sylda structure, the co-passenger Sky Mexico-1 was jettisoned into its orbit around ten minutes after the first satellite.

With a mass of around 6,200kg, DirecTV-15 is designed to operate from up to five different orbital positions between 99° W to 119° W in geostationary orbit.

The satellite will serve the continental US, Alaska, Hawaii and Puerto Rico with HD and 4K UHD direct-to-home TV broadcast services through Ku-band and Ka-band communications.

Said to be the most powerful broadcast satellite of its kind in the US, DirecTV-15 is produced by Airbus Defence and Space, based on its Eurostar E3000 platform.

Owned and operated by Sky Mexico, the Sky Mexico-1 will operate from 78.8° W in geostationary orbit and will offer HD direct TV broadcast services to Mexico, Central America and the Caribbean markets.

Built on Orbital ATK’s GEOStar-2 platform, the satellite features Ku and R-band transponders. Both have a design life of about 15 years.

Flight VA223 is the fourth for Arianespace this year, with one mission each for Ariane 5, Soyuz and Vega.

Arianespace intends to complete 11 missions this year based on the availability of payloads using its three launchers.

The company is preparing for its Vega Flight VV05 on 22 June, to lift-off Sentinel-2A payload, Earth observation satellite series for the Copernicus programme.