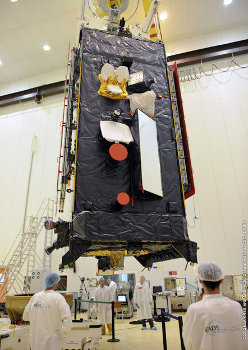 Thales Alenia Space’s plasma propulsion system (PPS), which includes two Thruster Orientation Mechanisms (TOM) that are designed and built by the company in France, will provide satellite station-keeping throughout its estimated service life of 15 years.

Initially started as part of the Stentor experimental satellite programme, the system’s design was qualified on the Astra-1K satellite, then further enhanced for the Alphabus programme.

"The system’s design was qualified on the Astra-1K satellite, then further enhanced for the Alphabus programme."

In-orbit tests on the Alphasat satellite, which was launched on 25 July, validated the functions and performance of the system, along with interfaces with the satellite, particularly with the Avionics 4000 suite, used on all geostationary platforms developed by Thales.

The latest in-orbit validation is a part of Thales Alenia Space’s strategy to continuously improve the Spacebus family, which uses mostly the same technologies as Alphabus.

According to the company, the development also strengthens its offering of geostationary telecommunications satellites using electric propulsion.

Over the past 30 years, Thales Alenia Space has delivered a broad range of propulsion systems or devices for LEO, MEO and GEO satellites, for functions that include communications and military appications, as well as for observation and science.

Thales Alenia Space is a joint venture between Thales (67%) and Finmeccanica (33%).